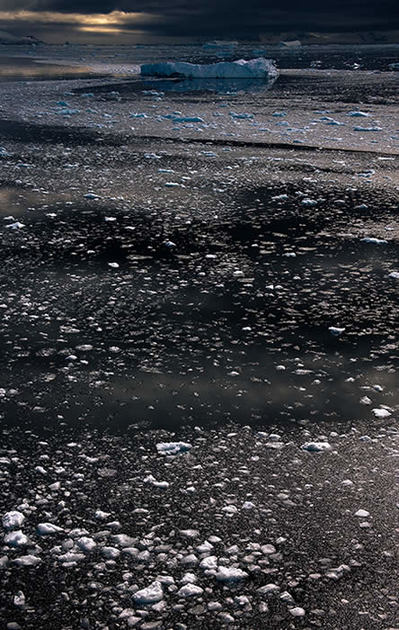 Antarctica is composed of two geologically distinct parts bridged by a vast iceshelf, the larger East Antarctica is a large sheet of continental crust (roughly the size of the United States) exposed only at the coastline and in the 2000 mile long Transantarctic Mountainss covered by an ice sheet averaging 1.6 miles thick and the smaller West Antarctica a cluster of smaller blocks of continental crust and an Andean-like chain of mountains forming the Antarctic Peninsula covered by the West Antarctic sheet (13% of the Antarctic ice sheet), most of which is grounded below sea level, down to 1.5 miles below sea level. Antarctica abounds with unique geographies. Lake Vostok, buried under 11,000 feet of ice, is the size of North America's Lake Huron. The Dry Vallies have not had precipitation in over 2 million years.

The most isolated continent, (Originally the heart of the now fragmented supercontinent Gondwanaland, Antarctica, the 5th largest of the 7 continents (larger than Australia and Europe, 50% larger in area than the United States of America), measuring 14 million square kilometers or 5.4 million square miles, drifted to the southern pole over a period of 150 million years.) it lies 4000 kms from South Africa, 2500 kms from Austrailia, 1000 kms from Argentina.

Sometimes called the bottom of the world, from the southern pole you can point in any direction and call it north.

The windiest continent, it creates its own wind system, with the highest global wind speeds recorded reaching up to 200 miles an hour. Of particular note are katabatic winds that occur when a large slow moving high pressure system (or anticyclone) accumulates over mountains creating orographic precipitation and forming a large pool of cold dense air, further cooled by when Earth vents heat into space, the cooled air spills falls down, and in many cases ice continues to supercool it on its descent, increasing its velocity.

One of the driest places on earth, the air is typically so cold it cannot carry moisture, it is technically a desert, with annual accumulations of less than 3cm or 1 inch (slightly higher than the Sahara desert). The Antarctic dry valleys have had no precipitation in over 2 million years.

Buried under snow and ice, up to 4897 meters or 15,700 feet thick, the vast majority of land has never been touched by man. Isostatic compression created by the weight of the ice depresses the continent by more than half a mile, to near sea level. Frozen into Antarctic ice is a record of atmospheric changes dating back 500,000 years. A significant portion of the West Antarctic icesheet is grounded below sea level, down to 1.5 miles below sea level.

The freezing of sea ice in winter more than doubles the area of the continent, experiencing a five-fold increase and decrease annually. The Antarctic ice sheet, technically the largest body of fresh water, contains 90% of the world's ice and 68% of world's fresh water.

The Antarctic ice cap creates an average of 100,000 icebergs each year, 90% of the earth's iceberg bass. Icebergs range in size from the size of a piano (growlers), to small houses (bergy bits), to 10 story buildings and larger, even the size of small countries. The largest recorded iceberg, B15 (300 by 100 miles, or 30,000 square miles, or the size of Belgium) broke off the Ross Ice Shelf in 1987. We typically only see the less dense ice above water (roughly 1/8th - 1/10th the mass), with the remaining compact core below the water comprising the rest of the mass.

If the Antarctic ice sheet were to melt, sea level would rise 60 meters or 200 feet.

Changes in Antarctica's climate herald global climate changes. It's the world's most significant area of heat loss and acts as a long term storage system in global water circulation. The Antarctic ice sheet works as the Earth's refrigeration unit. Ice reflects over 80 percent of the sun's radiation, reducing total global heat absorption. Sheet ice increases water salinity (salt is expelled during freezing) and serves as a barrier to energy exchange between ocean and atmosphere. Near-freezing non-saline meltwater runs off the ice sheet, along with water from melting icebergs, and falls to the ocean floor creating Antarctic Bottom Water (the coldest, saltiest water mass in the deep ocean), a primary driver in global ocean circulation. All of these factors alter weather patterns. A major meltdown will raise sea levels dramatically. (Similar forces are at work in the Arctic. One chief difference is that the melting of land-based ice, of which there is significantly more in Antarctica, more dramatically impacts sea levels.) Antarctica's relative isolation means there are virtually no geographic obstacles to this circumpolar current, creating some of the most violent seas in the world ("the roaring forties").

While there are some who debate whether global warming exists, there is overwhelming agreement among the scientific community that it does. The question is not if we contribute to the acceleration of global warming, it's how much and more importantly what can and will we do about it.

Global warming indicators are rises in temperature, sea level, and severe weather (causing flooding in some areas and drought in others). Other biproducts of climate change include a significant rise in the spread of infectious diseases. Already displacing many, if it continues unchecked will certainly displace hundreds of millions of people worldwide.

Changes are taking place above, on, and beneath Antarctica. The average temperature at the South Pole has risen by 2.5 degrees C in the last 50 years. Analysis of Antarctic ice dating back 500,000 years shows a higher presence of greenhouse gases now than at any other time before. The dramatic increase in greenhouse gases, such as carbon dioxide and methane, over the last 200 years are of particular concern.

Worldwide, glaciers are experiencing significant melting. With respect to the largest ice sheet on the planet, glaciers in the Antarctic Penninsula region are the most sensitive. A recent study examining 244 glaciers on the Antarctica Penninsula showed that 87% have retreated. Many ice shelves are retreating at rates of one half mile per year. Others have vanished. In 2002 the Larsen B ice shelf shattered and separated from the continent in the largest single event in a series of recorded ice shelf retreats. Between 1997 and 2002 the Larsen ice shelf lost 5700 square kilometers or 2200 square miles, becoming about 40% of its previous size. Antarctic temperatures have risen 2.5 degrees Celsius since 1940.

A biproduct of pollution, ozone levels above Antarctica have been depleted creating a 'hole' that fluctuates up to 20 million square km (more than twice the area of USA). A dramatic reduction in the use of CFCs in the last decade has led to a an equally dramatic slowing of ozone depletion.

Antarctica was the last continent to be explored. James Cook crossed the Antarctic circle in 1773. John Davis made the first continental landing in 1821. Roald Amundsen first reached the south pole in 1921. Some areas have yet to be charted. Antarctica is the only continent with no permanent or indigenous human inhabitants. Currently, average populations fluctuate between 2,500 in the summer and 1,000 in the winter.

While the continent exhibits low biotic diversity and population densities, with few animals (76 species of arthropods, nearly all of which are found only along the Antarctica coastline) and fewer plants, the waters surrounding it are very high in both. The coldest, densest, most biologically productive waters in the world make other waters seem like deserts by comparison. Antarctica provides breeding grounds for 45 species of sea birds (350 million birds, half of which are one of seven species of penguins), 11 species of whales, and 6 species of seals. The Antarctic waters teem with krill or small shrimp, one of the richest sources of protein on earth.

Between 1904 and 1965 over 1.5 million whales were killed in the Antarctic. The whaling industry stopped due to overfishing. Blue whale populations have plummeted from approximately 250,000 to 1000. In 1994 the International Whaling Commision declared an area around Antarctica as the Southern Ocean Sanctuary, in the hopes that the area will restore itself given time. The resolution passed with a vote of 23 to 1. A move to revoke it in 2006 failed with a vote of 33 to 28. Only Iceland, Japan, and Norway continue to harvest whales today, roughly 2000 a year, ostensibly for scientific purposes. Other types of fishing, such as long lines which ensnare seabirds, take their toll on the ecosystem. Some less cautious vessels also introduce rats to surrounding islands, which devastate sea bird colonies.

One result of the reduction in whales has been an increase in krill. As whales populations recover slowly, other species with higher reproductive capacities that also rely on krill as a food source, such as seals, are experiencing increased population growths.

Initiated by USA president Eisehower, the Antarctic Treaty was signed by more than 40 countries, June 23 1961, freezing all territorial claims and establishing a demilitarized zone. The Protocol on Environmental Protection was adopted in 1991, designating Antarctica as a natural reserve devoted science and prohibiting mining until 2048. Recently, many countries have been increasing their scientific presence, in part to solidify their position for future claims. America has built a 1000 mile ice highway connecting McMurdo base on the coast of the Ross sea with the South Pole. Australia has built a runway for civilian operated flights at Casey base.

90% of tourists visit Antarctica between November and March by ship. 75% land at just 20 locations. Tourism to Antarctica is not regulated by the Antarctic Treaty Environment Protocol. Instead it is self-regulated by the International Association of Antarctica Tour Operators, which promotes safe environmentally responsible practices. The 80 IAATO members primarily use smaller vessels carrying between 40 and 250 passengers. On the whole IAATO has worked well, with the exception of a few larger tour operators (comprising approximately 18% of the total number of tourists) of who have refused to join IAATO. Adventure tourism is on the rise in the area. The Antarctic and Southern Ocean Coalition attempts to address responsible growth, representing 40 countries and 200 conservation groups. Inspired by it overwhelming beauty, many tourists feel a responsibility to share their experiences with and inform other people.

There are a number of excellent resources on the region and related issues.