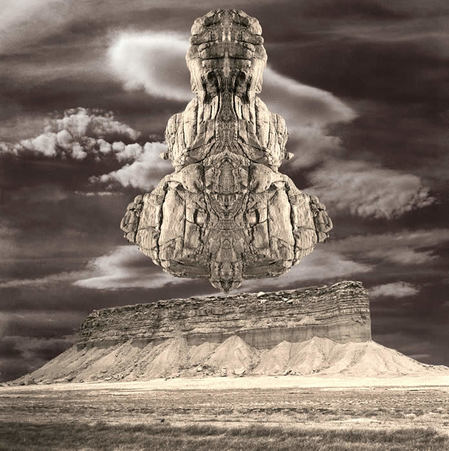 I knew instantly that something new had happened when I saw Budh appear on the screen. A discrete outline had been introduced to symmetry. Previously the symmetries I had been creating were unbounded. They defined planes of space. These defined sculptural objects. I had always seen faces and figures within the symmetries I created. The outline had now intensified the effect.

I didn’t know it then, but it was the beginning of a whole new series. I knew it after it began happening repeatedly. The process had led me to a new point of departure. The work was a surprise. I hadn’t planned on doing it. It came to me. I had planned to do another body of work, but this one seized me and asked me to stay with it while it was fresh. I listened. I have a feeling that if I had ignored that voice I would not have been able to return to it later, certainly not with the same intensity or understanding.

Repeatedly, the associations most offered with this image are that the figure looks like a buddha. I would not want to limit associations to one interpretation, but I do like that one. The working title for the piece was Unseen Watcher. In the end it named itself. Budh is the root of the word buddha. It means awake.

Budh sat there looking back at me. I could not look at the object as a mere lump of clay. It had a definite presence. The landscape it was drawn from had a presence, too. Somehow, the two felt compatible.

While many of my images have qualities similar to environmental sculpture, these images create sculptural forms made from the environment.

One day, as I made apologies to my friend Micheal More for needing to get off the phone quickly and chase a cloud that was drifting across the yard, Michael More kindly informed me, “It was considered a legitimate pastime in Samuel Johnson’s day to watch clouds.” Who hasn’t spent a hot summer afternoon looking for things in the shapes of clouds? A train of thought starts moving towards an unknown destination. As the clouds shift, one thing transforms into another. Nothing is fixed. Sometimes it all evaporates. If you’re not fully present to the moment, you’ll miss it. I still like to do this. It’s meditative.

We project meaning onto the world in order to give it an identifiable shape. Think of the things we see in the patterns of the stars above us: dogs, bears, serpents, swans, and all manner of heroic figures. Think also of the stories that go with them. If this is a “primitive” way of thinking, it is a very vital one. The great wells of folklore and mythology have their roots in this primal way of relating to the world. Beyond the confines of psychotherapy, we should relegitimize it, not as fact, but as a vital, much needed fiction.