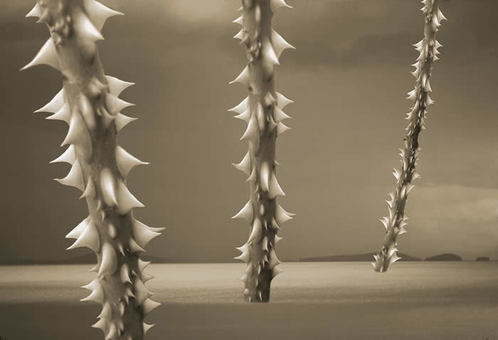 Converting Color to Black and White, 1994

Dangerous Passage was a compelling image. But something wasn’t working. The thorns were red. The stalks were green. The water was blue. They were not subtle. The color was garish. In many ways, the color was too literal. The drama of the composition was competing with the drama of color. The two were at odds. Their moods were incompatible. One was harsh and edgy. The other was bright and cheery. Color was the problem. So I removed it.

I was astonished to see how much control could be exerted in the distributions of tone. The thorns could be dark or light or any shade in between. The shifts were not linear shifts where the entire image became darker or lighter. Specific areas became dark or light based on their color. There were three primary distributions of tone that I could choose from (based on the three channels of the document — Red, Green, and Blue) but I could also choose a blend of the three. It was similar to exposing black-and-white film with differing color filtrations, but it was far more flexible and fluid. Best of all I could see the results instantaneously. The technique went way beyond dodging and burning. It was a form of tonal transformation, not augmentation. I was so impressed with the level of control, I stopped using black-and-white film altogether.

There were still many subtleties to be reworked. Where color, not tone, provided separation, things fell flat. What wanted to be read as separate merged, merged too much. Very often, color images converted to black-and-white need a little extra contrast. It was nothing a touch of contrast and a little dodging and burning couldn’t cure. Now was the time for global corrections, akin to the corrections made in the traditional darkroom with variable contrast papers. The dodging and burning tools might have changed, but the practice was equally sound. Better still, the corrections were made to the image before printing, not to each print of the image.

In black and white, unity was achieved. There were no superfluous elements. A whole statement was formed. The message was clarified. The image carried a much greater weight. Less became more.

The image was somber in black and white. That much suited the mood. But it was ashen, cold, and remote. I missed the emotional power of color. So I put it back.

I converted the image back to a color mode and introduced new color into the image. I tried a variety of “toning” options: silver, bronze, and gold; white gold, red gold, and green gold. I ran tests on dozens of solutions. Looking at them side by side I felt the emotional impact of each color. Green was sickly, blue was ice cold, red was too hot. I would have thought that all of them were more appropriate than gold. I was surprised that the warmth of gold enriched the image. With its introduction, the image rose forward, rather than receding, yet the space within it remained clear and distinct. As a result it was less remote. Somehow, it was more present.

Later, as my technique evolved, I reconsidered the image. Over the years, I had discovered a greater degree of control in converting color to black and white. I could extend this new-found level of control to specific areas of an image and not others. Unfortunately, I didn’t have the original full-color information in the composite. If I did, rather than recompositing, I would simply have returned to the original document and reseparated it. I had no choice but to recomposite the image. Now, I archive all my images in color, even those destined to become black-and-white images.

When I reconsidered the conversion, several things changed. The red thorns grew lighter. The sky grew darker. The contrast between the two made each even more dramatic. Many of the tonal relationships achieved would have been difficult to achieve by locally correcting them. Dodging and burning only go so far. The dynamic range of an area can be compromised, or tonal transitions may take on an unnatural increase or decrease in contrast. When very substantial transformations of tone are needed, other methods are required to achieve optimal information throughout the tonal scale.

Very subtle shifts in composition were made. After all, the image was different now. The balance of elements needed to be shifted slightly to accommodate their new relative weights. Each new nuance demanded a counterpart in another area or aspect of the image. While new conversion methods provided the previous controls, this ability to fine-tune composition is clearly attributable to the fact that the image is a composite image. New methods offer new controls. Similarly, new kinds of images offer new kinds of controls.

Some think that digital printmaking is a matter of getting it right and then pressing a button. With the possible exception of printing an entire edition at one time, this is a misconception. No printmaking device is that constant. Digital printmaking is still just that, printmaking. As conditions change, adjustments must be made. Fears that an artist’s interpretation of an image cannot evolve over time in digital printmaking are unfounded. Clearly it can. The West Coast tradition savors the famous line, “The negative is the score and the print is the performance.” Whether you have a negative (traditionally or digitally created) or a digital file, every print is a performance. When do you stop? When the image can’t be improved upon. In between performances, create the richest score you possibly can.