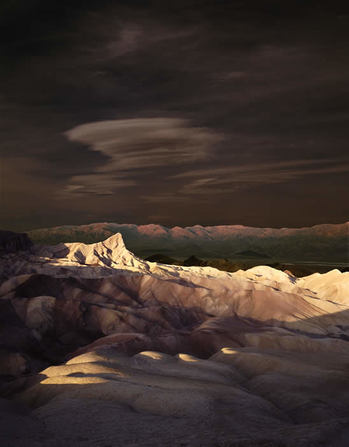 Oriens represents a new line of inquiry for me. Take the most compelling passages of changing light throughout an extended duration of time and weave them into a single composition. I’d been looking for the right situation to use this technique for quite some time. When I returned from Death Valley a friend said, “Zabriskie Point? Again? Well, I’ll bet you could photograph Zabriskie Point in a way that hasn’t been done before.” It was only then that I realized I had missed the shot(s) the first time. As I began the second journey, I realized there was a flaw in my plan. The “best” light in every area of the picture might not be as dramatic as I had thought. Every area of the image would demand equal attention. I nearly gave up hope, but I persisted. As usual something else worked out. While my intention was clear, the subject and the process informed me. I had to respond to the place and the images generated, not just what was in my head, to find the solution. As I looked at my transparencies it presented itself. The new solution even highlighted my feelings about the place more strongly than my original idea. I had been impressed by the way the light first struck the dagger-like peak after creeping across the valley floor. Its first appearance at each separate point throughout the landscape was a dramatic revelation, a crescendo in a magnificent performance. Rather than finding its epitome in a single moment, I found it in many. The result, different from my conception, but consistent with my intention, achieves a dramatic lighting effect never before seen at one time. Yet, a similar sequence of experience has been witnessed countless times.

The light on the foreground in this image is faithful to the transparencies that recorded it. The separate portions have not been modified substantially, nor were they modified in an inconsistent manner. There has been no dodging and burning. Nothing has been added or altered. The light has simply been resynchronized. The background has been altered differently. To unify the composition the mountains have been made slightly darker and more yellow, a move akin to burning in the area.

The sky is an addition. The small sliver of sky contained in the original exposures cramped the composition. The vast sense of space found in the desert was missing. The sky had, in fact, been the first indicator of the presence of the coming light, making a thousand transformations before its arrival. The sky that morning was not particularly noteworthy. I could have spent a lifetime waiting for the perfect sky. I chose instead to incorporate another sky that supported both the composition and the light. This sky I altered dramatically, both in tone and color. I did so to expressively highlight the drama of the light below, to support it and not detract from it. While the lower half of the image is a matter of resynchronization, the upper half is a matter of recontextualization.

Neither method, resynchronization or recontextualization, yields a classically objective document. But the results of either application may yield artifacts that are truer to our experience of events. In one respect these represent the events more faithfully — they encompass the passage of time.