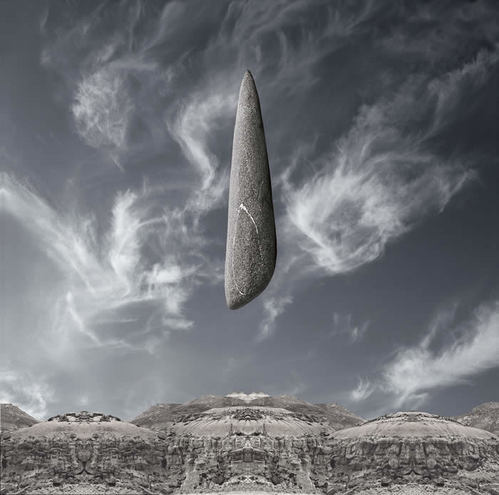 Edge was critical throughout the entire process of composing Triple Goddess. First there was contour. What shape would the stone finally take? The original had been buried in sand. The stone was far too large to dig out, so I cut away the background that threatened to envelop it. This made certain determinations of shape. It may even have been the shape the sand made out of the stone that first attracted me to it. Had I seen the entire stone I might not have been so drawn to it. To date I have no idea what the full stone looks like, as I was only able to see a portion of it. Yet the line the sand created still needed refining. In my first attempts the bottom of the stone remained full and heavy. Later, I cut it more angularly, which lent it a new motion, but more importantly it altered its character. As I searched for the final shape, I was reminded of shapes I had seen in Brancusi’s sculptures. I had to fight my tendency to cut a clean precise line, opting instead to let the wobble of my hand with a brush give the final appearance of the stone a very subtle rough hewn look. The resulting line was personal not clinical. I feel a physical or kinetic understanding of things is achieved through drawing, which imparts a different sense of knowing to the image. Then the issue of how hard or soft the line should be arose. I cut the mask hard first and blurred it later to determine this precisely. To turn the space, I softened the dark side slightly more, forcing it to recede, and the light side slightly less, forcing it to rise forward. Volume was increased. Again, the effect is subtle, but present. Through a process of searching for shape, which is defined by an outline or edge, the character of the stone was clarified.Who was the sculptor of this stone — the rock itself, the forces of nature, the sand, or me? Undoubtedly, the final effect was generated from the confluence of all of the energies involved. In one sense the work is collaborative.

The horizon line needed similar attention, too hard an edge and the landscape would look cut out, too soft an edge and the atmosphere that enveloped it would seem too thick to hold the level of contrast and detail found there. Without the right balance, the land and the stone would not breathe the same air.

Several edges were made invisible, the seams at each of the points of symmetry.

There are four more edges at work here, ones we take for granted so often that they are nearly invisible. The edges of the picture frame contain the forces of the interactions within the image, setting the stage for the drama, giving a definite shape to the entire composition.

There are other edges at work here. The edges of the clouds, air flowing energetically in contrast to the stability of the earth, seemed to want to touch the edge of the stone in a specific way. I split the sky and filled the resulting gap to pull a feathered breath from behind the monolith and suggest a caress.