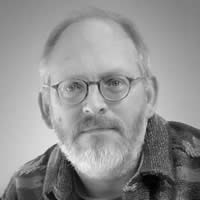 Having studied photography in the early 1970's with such notables as Ansel Adams, Wynn Bullock, Steve Crouch and Al Weber, Witherill has remained faithful to his classical roots while progressively transitioning toward a more contemporary approach to the medium. Since 1975, his work has been featured in more than one-hundred individual and group exhibitions in museums and galleries throughout the world.

Indicative of a diverse approach to the medium, Witherill works in both color and black & white, and his subjects include classic landscapes, studies of pop-art, botanical still-life, urban architecture, abstracts, and digital imaging. His photographs have been the subject of three award winning hardcover monographs titled: Orchestrating Icons (2000), Botanical Dances (2002), and Photo Synthesis (2010). In 1999, Witherill was the recipient of the "Artist of the Year" award presented by the Center for Photographic Art, Carmel, CA.

The nicest thing about most photographs is: if you give them enough time… they will fade!
Steve Crouch

Only in men’s imagination does truth find an effective and undeniable existence. Imagination, not invention, is the supreme master of art, as of life.
Joseph Conrad

Always remember that you are absolutely unique... just like everyone else.
Margaret Meade

If I had two lifetimes, I could learn to play the cello.
Pablo Casals

You cannot depend on your eyes, when your imagination is out of focus.
Mark Twain

When you are looking to find photographs... open up your mind and be still with yourself. The photographs will find you.
Paul Caponigro

Change is inevitable… (except from a vending machine).
Robert Gallagher

When it comes to thought, some people will stop at nothing
Anonymous

Arriving at a plateau in any art form, and staying there forever, eventually stagnates both the artist and the art.
Al Weber

The ultimate shortcoming of technical problems is not that they are hard, but that they are easy. You don’t win high points for making even the perfect swan dive off the low board.
David Bayles and Ted Orland

Art derives a considerable part of its beneficial exercise from flying in the face of presumptions.
Henry James

And finally… to shamelessly quote myself…

A camera can not transform you into an artist (or a photographer). But it can provide you with a pretty good excuse to over indulge in a lot of self-discovery and personal revelation.
Huntington Witherill