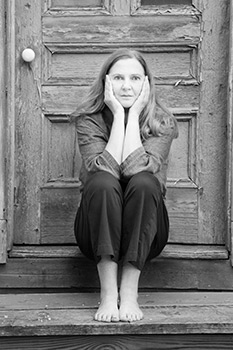 Tenneson is among the most respected photographers of our time, and has been described critically as "one of America's most interesting portrayers of the human character." Her work is a combination of portraiture and mythology-she is interested in discovering the archetypes of our being.

Tenneson's work has been shown in over 150 exhibitions worldwide, and is part of numerous private and museum collections. Her photographs have appeared on countless covers for magazines such as: Time, Life, Entertainment Weekly, Newsweek, Premiere, Esquire and The New York Times Magazine. She is also a much sought-after portrait photographer with clients in Europe, Japan, and the United States.

Ms. Tenneson is the author of fifteen books. She is the recipient of numerous awards, including the International Center of Photography's Infinity Award, for best applied photography, and the 2012 Lifetime Achievement Award from the Professional Photographers of America. In addition, she has been named "Photographer of the Year" by the international organization, Women in Photography. A recent poll conducted by American Photo Magazine voted Tenneson among the ten most influential women photographers in the history of photography. Joyce lives and works in Rockport, Maine.

Tenneson's portraits go beyond a surface recording of her subject's likeness. Her signature-style images attempt to show the inner person who hovers behind the facade. Says Tenneson: "I want to allow others to reveal and celebrate aspects of themselves that are usually hidden. My camera is a witness. It holds a light up for my subjects to help them feel their own essence, and gives them the courage to collaborate in the recording of these revelations."

Through a portrait, we can potentially see everything — the history and depth of a person's life, as well as evidence of a primal universal presence. I have dedicated my life and creative energy to capturing these transcendent moments in which a connection is made between the subject, the photographer, and the viewer.
Joyce Tenneson

I want to allow others to reveal and celebrate aspects of themselves that are usually hidden. My camera is a witness. It holds a light up for my subjects to help them feel their own essence, and gives them the courage to collaborate in the recording of these revelations.
Joyce Tenneson

I seek what lies beneath surface beauty. What interests me are intimate human complexities - the darkness as well as the light. I cannot will this kind of transcendent communication into existence. I have to be open and truly present, and if I am lucky, grace descends. My best photographs are an honest collaboration, and when the viewer also connects, I feel the circle is complete.
Joyce Tenneson

In my view you cannot claim to have seen something until you have photographed it.
Emile Zola

A woodland in full color is awesome as a forest fire, in magnitude at least, but a single tree is like a dancing tongue of flame to warm the heart.
Hal Borland

A morning-glory at my window satisfies me more than the metaphysics of books.
Walt Whitman

Adopt the pace of nature: her secret is patience.
Ralph Waldo Emerson

Do not go where the path may lead, go instead where there is no path and leave a trail.
Ralph Waldo Emerson

Everybody needs beauty as well as bread, places to play in and pray in, where nature may heal and give strength to body and soul.
John Muir

Solitary trees, if they grow at all, grow strong.
Winston Churchill

The butterfly counts not months but moments, and has time enough.
Rabindranath Tagore

When I have a terrible need of - shall I say the word - religion. Then I go out and paint the stars.
Vincent Van Gogh

Whether he is an artist or not, the photographer is a joyous sensualist, for the simple reason that the eye traffics in feelings, not in thoughts.
Walker Evans

It is always the instantaneous reaction to oneself that produces a photograph.
Robert Frank

Put yourself on view. This brings your talents to light.
Baltasar Gracian

Only through art can we get outside of ourselves and know another's view of the universe.
Marcel Proust