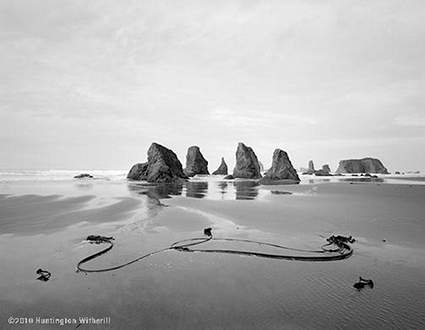 Having studied photography in the early 1970’s with such notables as Ansel Adams, Wynn Bullock, Steve Crouch and Al Weber, Witherill has remained faithful to his classical roots while progressively transitioning toward a more contemporary approach to the medium. Since 1975, his work has been featured in more than one-hundred individual and group exhibitions in museums and galleries throughout the world.

Indicative of a diverse approach to the medium, Witherill works in both color and black & white, and his subjects include classic landscapes, studies of pop-art, botanical still-life, urban architecture, abstracts, and digital imaging. His photographs have been the subject of three award winning hardcover monographs titled: Orchestrating Icons (2000), Botanical Dances (2002), and Photo Synthesis (2010). In 1999, Witherill was the recipient of the “Artist of the Year” award presented by the Center for Photographic Art, Carmel, CA.

What’s the best thing about photography?
Its vast potential for personal expressiveness.

What’s the worst thing about photography?
Its overly ubiquitous nature.

What’s the thing that interests you most about photography?
Its ability to inform me about myself and about the world around me.

What’s the thing that interests you most about your own photographs?

I am always interested and amazed by the way in which my own photographs can serve to so accurately reflect my own perceptions and sensibilities.

What’s the thing that interests you most about other people’s photographs?
I am most interested in the way in which others’ photographs can occasionally transport me to states of heightened awareness and impassioned veneration.

Who are your photographic influences now?
Current influences include most all of my colleagues, friends, and fellow photographers who, collectively, provide ongoing support, encouragement, and inspiration.

How do you know when an image doesn’t work?
It will fail to communicate anything beyond the fact that it is a photographic record.

How do you know when an image is good?
I know an image is good when it exhibits the following three (3) attributes:
#1- An interesting and effective use of light has been captured.
#2- A visually stimulating and well-balanced composition has been employed.
#3- The technique and craftsmanship used to render the photograph itself demonstrates sufficient proficiency so as not to disrupt or distract from either #1 or #2.

What’s the most useful photographic mantra?
Focusing on the process of living one’s life as an artist is far more important than focusing on the actual art that is being produced.

Do you practice another art form? (If so, which?)
Music.

What benefits do you get from (this/these) other art form/s?
Inspiration, relaxation, and enjoyment

What was the most significant visual moment in your life?
Viewing an exhibition of Van Gogh paintings at the Museum of Modern Art, in New York City, when I was 14 years old.

Which was the most important image to you that got away?
The images that get away are of no importance to me. There is alwaysanother image.

What failure did you learn the most from?
The initial failure to realize my own potential.

What accomplishment are you most proud of?
I am most proud of knowing that have lived a life that has been personally rewarding, challenging, and satisfying.

What’s the thing you most hope to accomplish?
I hope to be able to maintain my ongoing passion for the pursuit of personal growth and stimulation as an artist and photographer.

If you had to do it all over again, what would you change?
Nothing… at all!

If you had another life to live a completely different life, what would you choose to do?
I’d be a shortstop for the NY Yankees!

How did photography change your world?
It caused me to view myself, and the world around me, in a much more personally effective and fulfilling way.

What’s the worst thing about influence?
If not carefully handled, influence can too easily lead to imitation.

What’s the best thing about our times?
Technology.

What’s the worst thing about our times?
Technology.

What is the trait you most deplore in yourself?
Ignorance and the inability to personally recognize it.

What is the trait you most deplore in others?
Ignorance and the inability to personally recognize it.

What’s your motto?
When the going gets tough, hang on tight. And, if that doesn’t work… let go and see what happens.