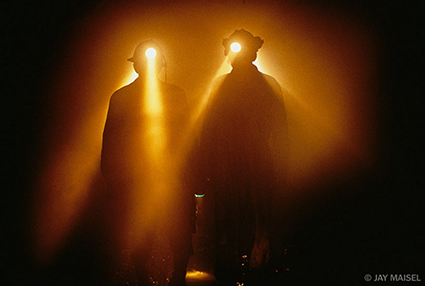 After studying painting and graphic design at Cooper Union and Yale, Jay Maisel began his career in photography in 1954. While his portfolio includes the likes of Marilyn Monroe and Miles Davis, he is perhaps best known for capturing the light, color, and gesture found in every day life. This unique vision kept him busy for over 40 years shooting annual reports, magazine covers, jazz albums, advertising and more for an array of clients worldwide. Some of his commercial accomplishments include five Sports Illustrated swimsuit covers, the first two covers of New York Magazine, the cover of Miles Davis’ Kind of Blue (the best-selling jazz album of all time), twelve years of advertising with United Technologies, and a litany of awards from such organizations as ICP, ASMP, ADC, PPA, and Cooper Union. Since he stopped taking on commercial work in the late ’90s, Jay has continued to focus on his personal work. He has developed a reputation as a giving and inspiring teacher as a result of extensive lecturing and photography workshops throughout the country. He also continues to sell prints, which can be found in private, corporate, and museum collections.

What’s the thing that interests you most about photography?
New experiences.

What’s the thing that interests you most about your own photographs?
It’s surprising how lucky I am.

What’s the thing that interests you most about other people’s photographs?
They inspire me.

Who are your photographic influences now?
Life itself.

Who are your non-photographic influences now?
All the above and Shig Fukuda, Richard Pryor, James Turrell, and Robin Williams.

What’s the most inspiring work of art you saw recently?
Shows by James Turrell in LA and NY.

What’s the best thing about gear?
It exists and keeps getting better.

How do you know when an image doesn’t work?
It doesn’t move you in any way.

How do you know when an image is good?
It moves you emotionally.

How do you know when an image is great?
You don’t’ have to think about it, it just does.

What’s the most useful photographic mantra?
Be open

Do you practice another art form?
Woodworking, drumming, basketball, and Karate

What benefits do you get from (this/these) other art form/s?
Woodworking is aesthetic and therapeutic. Drumming is joyful. Basketball and Karate were outlets for competitiveness and violence, pretty much now gone from my palette.

Which was the most important image to you that got away?
Maybe the following on my first job: Getting 100 shots of Marilyn Monroe and Sammy Davis Jr. flirting at the piano, and realizing there ain’t 100 shots on the roll, ergo, make sure you’re on the take-up spool.

What failure did you learn the most from?
I did a shoot over and over again (22 times) for a book on San Francisco. That means I had 21 failures and the following anonymous quote “It’s not how many times you fail, what counts is how many times you get up.”

What accomplishment are you most proud of?
That I never lost my enthusiasm and arrogance.

What’s the thing you most hope to accomplish?
To never loose my enthusiasm and arrogance.

If you had to do it all over again, what would you change?
Not much.

If you had another life to live a completely different life, what would you choose to do?
First baseman for the old Brooklyn Dodgers.

What are the most important questions to you?
All the ones I can’t answer.

What’s photography really all about?
A quote from Sam Garcia, “Photography is about everything but photography.

How did photography change the world?
It left and leaves an indelible image that makes it impossible to reverse history.

How did photography change your world?
It helped me make a living, have a family and do what I loved.

Who were the most important photographers?
I think classification and judging are ridiculous.

Who are the most important photographers working today?
Same.

What’s the best thing about influence?
Influence can guide your footsteps.

What’s the worst thing about influence?
It can keep you from making your own path.

What’s the best thing about our times?
Unlimited knowledge and opportunity.

What’s the worst thing about our times is?
Greed, bottom line mentality and dishonesty.

What keeps you up at night?
Heartburn.

What gets you going in the morning?
Fear of missing something.

What’s your favorite movie?
Woman in the Dunes or 7 Samurai (Both Japanese movies).

Which living person do you most admire?
My daughter, Amanda.

What is the trait you most deplore in yourself?
Procrastination, impatience, and ignorance.

What is the trait you most deplore in others?
Dishonesty.

What is your greatest extravagance?
Books and Taxis.

What is your favorite journey?
To any place new.

On what occasion do you lie?
On the same occasion everyone else does.

What do you dislike most about yourself?
Procrastination, impatience and ignorance.

What is your most marked characteristic?
Loud, vulgar and thoughtful.

Which words or phrases do you most overuse?
If I knew I would stop it immediately.

What is your greatest regret?
Remarkably none. I’m not too impressed with hindsight.

What do you consider your greatest achievement?
Long-term survival.

What’s your most treasured possession?
You’re kidding, right?! I have a shitload of favorite possessions.

What is your favorite occupation / past time?
Shooting, sex and watching TV.

What do you most value in your friends?
Honesty, humor, compassion.

What’s your motto?
Fuck it! Do whatever you want (as long as it doesn’t hurt anybody).

What other talent would you most like to have?
I would love to be able to draw really well with ease and truthfulness.

If you could change one thing about yourself, what would it be?
I’d be calmer, less judgmental (and taller).

What is it that you most dislike?
Hypocrisy, bigotry, hatred and dishonesty.

How would you like to die?
Fucking. I always thought it would be great to come and go at the same time. Richard Pryor said the line for people waiting to die that way would be longer than those waiting to die in a horrible auto accident.

What is your greatest fear?
Blindness

What accomplishment are you most proud of?
That I never lost my enthusiasm and Innocence.

What’s the thing you most hope to accomplish?
To never loose my enthusiasm and innocence.

What was the most significant visual moment in your life?
Watching my daughter as she entered into the world, horrible quiet and then seeing her stretch out her arms and start yelling.