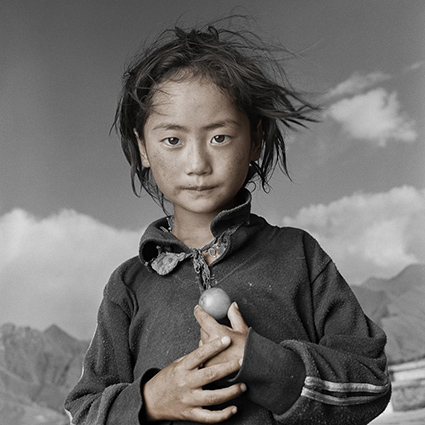 For over twenty-five years Phil Borges has lived with and documented indigenous and tribal cultures around the world. Through his work, he strives to create a heightened understanding of the issues faced by people in the developing world.

Through his exhibits and award-winning books, Phil attempts to create a relationship between the audience and his photographic subjects. “I want the viewer to see these people as individuals, to know their names and a bit of their history, not just to view them as an anonymous part of some remote ethnic or tribal group.”

What’s the best thing about photography?
Photography has been the key that has let me enter cultural worlds very different from my own.

What’s the thing that interests you most about photography?
I have always been interested in the power of images to inspire, provoke, and inform.

What’s the best thing about gear?
It’s exciting. Today it is evolving so fast and allowing us to create images and sequences we could only imagine before. Smaller, better, cheap.

What’s the worst thing about gear?
It’s expensive and heavy, and today it depreciates faster than automobiles!

How do you know when an image is great?
You can feel it. It moves you emotionally.

What’s the most useful photographic mantra?
‘Get closer’.

Do you practice another art form? (If so, which?)
Carpentry and interior architectural design.

What benefits do you get from (this/these) other art form/s?
An appreciation for good composition.

What failure did you learn the most from?
Losing my cool with difficult people. It always fails.

What accomplishment are you most proud of ?
I’ve managed to just do the film and photo projects I’m interested in. For this I’m both proud and grateful!

If you had to do it all over again, what would you change?
I would have devoted myself to photography and film at an earlier age—I started when I was 45.

If you had another life to live a completely different life, what would you choose to do?
I would be a photographer / filmmaker if I could do it all over again.

How did photography change your world?
It took me out of the dental office—out of peoples mouths.

What’s the best thing about influence?
You can bring about change.

What’s the best thing about our times?
Technology.

What’s the worst thing about our times is?
Technology.

What is your most marked characteristic?
Persistence.

What do you most value in your friends?
Humor, authenticity.

What’s your motto?
What you resist persists.

What other talent would you most like to have?
Musical talent.