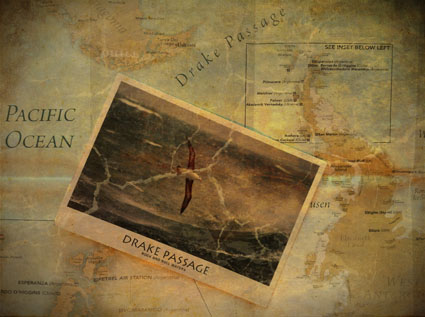 Today the photography leaders presented their work offering visual introduction to the kinds of work in which they specialize, tips on how they overcame challenges, and lots of inspiration. It’s always inspiring to hear other visual artists who are at the top of their game, share their work and provide insights into what motivates them. In the arts, it seems nothing is more important than passion.
We got lucky and had an opportunity at the end of the day to make our first zodiac landing at Barrientos Island, which contains a large chinstrap penguin colony. I came in on the last zodiac and by the time we reached the shore the winds had picked up dramatically forcing our expedition crew to move the take out site to the opposite side of the island. It was a great warm up, familiarizing everyone with the routines necessary for zodiac landing and cruising.

Crossing Into The Drake Passage 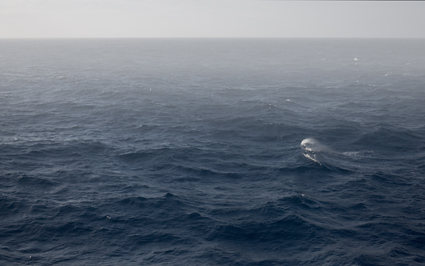 After an evening cruise down the Beagle Channel, the rolling waves of the Drake Passage began to perform. There had been high winds for several days so we expected a rougher than average crossing. These waves were different. There were no breaking crests, no slamming of the boat, just endless incessant rolling – 40 degree rolls. Making this passage was like being rocked by an over-zealous mother. The gray skies blocked any trace of sunlight. No crests, no distinctive clouds, no light; this was one of the less picturesque crossings I’ve made. Fevers at night, daily headaches, and slight nausea put a final damper on the whole affair for me.

More Drake. It’s gone from calm to rough. I’m sure it will change again. It’s a long stretch home filled with seminars and reviews. 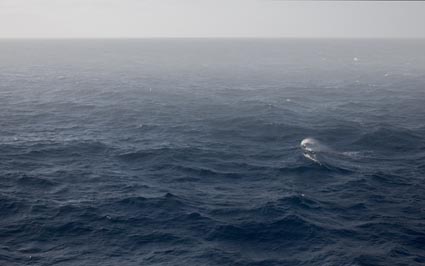 Today I talked about the importance of defining a project that makes the work we do tangible and shareable. My project will be to update my Antarctica Blurb book with new images and updated text. I then handed the session off to Olaf Willoughby who talked about his Antarctica book (PDF for World Wildlife Federation and on demand print through Lulu), which he did after our first 2005 voyage, and it’s effectiveness for environmental advocacy. It’s inspiring to hear what one man can do.
See my previous post on Olaf from early this month.
See my Defining a Project PDF here.
Enjoy my Antarctica galleries, book, and statements.
Learn more about my workshops here.
Early registrants get discounts at home.
Members get discounts abroad.

Out into the Drake Passage once again. High seas. I’ll be looking out for weather, wind, and light on water. We present seminars between meals. Try dodging and burning in the Drake one handed with a track pad!
One of the most interesting sessions involved each of the instructors processing one of our files. The comparisons of workflow and perspective were really insightful. Seth processed one of his images in less than 2 minutes, all in Lightroom. Michael spent a little more time in Lightroom. Jeff and I started in Lightroom and moved to Photoshop. Stephen still works almost exclusively in Bridge and Photoshop. A lot of participants took away an important concept. There isn’t one right way. A workflow evolves out of the objectives of each individual. It’s my opinion that many people need more than one workflow – one high productivity and one high touch. On weekends when I photograph my family my workflow should be closer to Seth’s – so my family actually gets the images I make. On weekdays, when I’m mastering images that will last me the rest of my career, I should be taking more care and spending more time.
Enjoy my Antarctica galleries, book, and statements.
Learn more about my workshops here.
Early registrants get discounts at home.
Members get discounts abroad.

More Drake. Smoother and smoother sailing. This is the easiest crossing I’ve had so far. And it’s the hardest to make images during; not much is happening visually (no white caps and spray, no glittery surface, no storm fronts or crepuscular rays). Last night we crossed over the Circumpolar Current at the Antarctic Convergence (roughly 60 degrees latitude) signaling our passage into the Antarctic. The Antarctic can be defined biologically (species), geographically (shifting currents of less salty colder water), or politically (there are many claims, all on hold until 2040). Our final destination is another important dividing line, the Antarctic Circle; below it in summer the sun doesn’t set, in winter it doesn’t rise.

Find more Antarctica facts in my Statement Antarctica facts.
Steve Johnson presented on digital exposure today. Key ideas. Expose for histogram; process for appearance. Monitor your histograms to avoid clipping. Since the histogram is generated by a processed JPEG, using a low
contrast setting for JPEG generation in your camera will give you a better (but not perfect) preview of the data contained in your Raw file, which will always have more data than a JPEG. Finally, weight histograms high without clipping, the most data is contained in the lightest stop while the least data (hard to separate from sensor noise).
Jeff Schewe gave a blow by blow run down of Adobe Camera Raw. Thomas Knoll (the original author of Photoshop and Camera Raw) answered questions along the way. It’s going to be a really interesting trip!
Find out more in my Technique Downloads
Enjoy my Antarctica galleries, book, and statements.
Learn more about my workshops here.
Early registrants get discounts at home.
Members get discounts abroad. 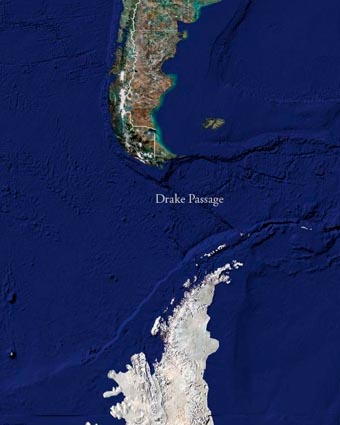 It takes almost two days to cross the Drake Passage (the roughest waters in the world)(we’ve been blessed with an easy crossing) to get to Antarctica. What do you do while you’re waiting to arrive? Sleep. Read. And listen to onboard lectures. Watch the ocean. Weather thick but not interesting. Light low. Wind and waves relatively small – enough to bounce us around, but not enough to perform for the lens.
The Quark team offers lectures on the area. It’s interesting to note that200 years ago Antarctica was just an idea. The explorers who discovered it in bits and pieces went through harrowing experiences to find them, largely pursuing commercial interest before scientific ones. Times change fast. Now the region is in an era of government sponsored scientific research. The first tourist cruises started in the early 60’s. Recently, there’s been an explosion of tourism in the last ten years; 1998 7,000 people; 2008 35,000 people. The staff is split; it’s too early to tell if global warming is having an impact on the area versus it won’t be here for long.
Seminars started today. Seth Resnick did a great job on asset management. His recommendation for file naming? 31 characters, no spaces, no punctuation, except . – and _. Dates in yyyymmdd – 20090111. His file name – 20070125_sobe_0001.cr2.)
Seth has many examples of how the right keywords have translated into dramatic increases in his stock photography sales. Learning more about keywords is high on my list this trip. I need them for an upcoming project. My advice? Just get started. No matter what kind of photographer you are, keywords are useful. The longer you wait, the more work you’ll have to do later. No system will ever be perfect. Things (systems and words) will evolve.
Enjoy my Antarctica galleries, book, and statements.
Learn more about my workshops here.
Early registrants get discounts at home.
Members get discounts abroad.

Today was all logistics. Get last minute items. Pack and load bags. Find my cabin. Get luggage stored and tied in for a bounce across the Drake Passage. Introduction to and orientation with the Quark staff. Safety issues. Now it’s two days of bounce before the action really starts. Most people find the open ocean boring. Given the right conditions, I love it. Pray for light or wind to create a drama on an seemingly infinite stage.
Enjoy my Antarctica galleries, book, and statements.
Learn more about my workshops here.
Early registrants get discounts at home.
Members get discounts abroad.