In the spectacular large-scale projects he’s famous for (such as “Waterfalls” in New York harbor), Olafur Eliasson creates art from a palette of space, distance, color and light. This idea-packed talk begins with an experiment in the nature of perception.
Find more of my favorite TED videos here. 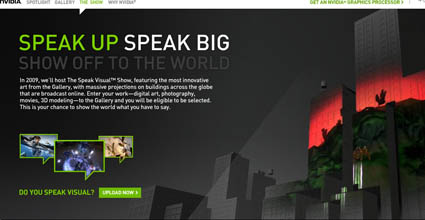 In 2009 NVIDIA will host The Speak Visual Show, featuring massive projections on buildings across the globe and simultaneously broadcast online. All types of artwork are being accepted.
You can enter online. Look at the rights granted before you enter. To my mind the usage is too open ended. That’s why I haven’t entered. And I’ve told them so. Maybe the terms will change.
In the meantime, the concept is fascinating and the event should be too.
Check out the Speak Visual Show here.

The Future of Video Projection?

Princess Leiah, can you color manage that?
Now I know I’m a geek.
A bad Star Wars joke and color management in the same line?
But, this technology stuff is very cool.
Check this out.
Video in thin air?
The Helio display is a video projector that casts images on condensed air.

This video is a record of one of my new Participation Pieces. They use images projected in the dark – with no screen. You can’t see the image until you create one. That’s what I invite other people to do. Initially, I provide scattered flour. Other materials will surely be incorporated soon. The way the screen is created changes the image. The image is never the same twice. Sometimes you see it only partially. Sometimes the screen moves. Letting the flour fall produces a rain-like effect. Blowing the flour into the air creates a cloudy effect. The participant changes the image. Without a participant, there’s no image to see. And the viewer’s point of view changes what’s seen. If you’re a participant your activity limits your ability to see all angles. If you’re a viewer you have to move to see all angles and you can’t see all moments from all angles. It takes many people to create and view the entire event.
Projection changes the image. Two-dimensional images become three-dimensional. A point becomes a line. A line becomes a plane. A circle becomes a cylinder.
What kinds of images am I projecting? Images of celestial phenomena I normally exhibit in print form. Images of the light patterns I render in my series Refraction. Animations of those line patterns created in Photoshop. I’m sure I’ll find more locations, screens, and images in the days to come.
Many of these images are of eclipses. Coincidentally, August 1 and 16 there are eclipses (solar and lunar). Find out more about today’s solar eclipses here.
After thinking about environmental sculpture and projection for a long time, I finally started creating projections during a Creativity workshop with Sean Kernan. You can find my June posts on it right here on this blog. Just type in Kernan in the Search field and click Go.
You can see my Annual Exhibit in person 8/2-3. Find out more here.
Stay tuned for online releases all weekend long.

Christine’s been working on images of projected light and screens. So she decided to explore presenting her images as screens with projected light. She found some alternate substrates – transparency, transparent material with a translucent backing, tissue paper, glossy film. We did a little brainstorming about presentation. We played with light and shadow. The light and shadow itself took on a presence in the presentation. Essential elements of photography, light and shadow, what photography represents and uses to represent, are beginning to be incorporated into the presentation – sometimes abstractly and dynamically. A whole new set of doors opened up. It’s important to explore the potential of new materials. After all, this is what has propelled photography all along, including fueling the digital revolution.
How many ways can you think of extending printmaking for your work?
These are the kinds of dialogs Mac Holbert and I have every day with participants in our the Fine Art of Digital Printing workshop during our extensive One on One and Review sessions.
Find out about the Hallmark Institute of Photography here.
Find out more about The Fine Art of Digital Printing workshop here.
Find out about my The Fine Digital Printing workshop series here.

Today we experienced the class participants assignments. The assignment was “extend the photograph”. “What?” we all asked on Monday? Sean cited past examples. Polaroids were positioned throughout a space (the space we were holding class in – one of the Polaroids was still in position next to the Exit sign years later) inviting viewers to search the area carefully. A viewing device was directed toward a scene and when used a composition of an orange in the tree was revealed out of the chaos of the total background. A flashlight illuminated a patch of gravel while audio played of footsteps running for minutes and then abruptly stopping, referencing a rape in Santa Fe, New Mexico. It was so open ended, we struggled with the assignment all week. That means we all came up with more ideas than we actually executed. It was a great assignment.
What happened this year? Here are a few highlights.
Jeanne Reilly constructed an accordion display of the Center for Maine Contemporary Artists exhibition space.
Elizabeth Opalenik constructed a book shelf, part photograph and part found objects, inviting the viewer to interact with the piece.
Alison Shaw created two pieces – a dyptich of prints of water submerged in water and rephotographed and a group of 9 atmospheric nautical images presented in a grid.
Sean Harrison filled an old doctor’s bag with eggs and photographs, collecting ideas.
Tara Law performed a candlelight reading of her writing sitting on lace beside one of her photographs.
Virginia Hastings created a trail of clothes leading to her performance piece, silently reading a magazine in her slip and curlers in the bathroom below a postcard of Marilynn Monroe.
Maria asked us to partner up, one person the photographer and the other the camera leading them blind to a composition of our choosing before asking them to “make the exposure” with our eyes. Along the way we searched for her installations.
Jay Maisel presented a stream of consciousness slideshow.
Greg Heisler made two 20×24 prints with guides to view them at a specific distance to intensify the impression of space within them.
Arduina Caponigro constructed a manageable landscape of white sands made of salt in a pinhole camera with varying tops to control the light and tiny rakes to change the dunes.
Dee Pepe created an altar installation in a dark room with smoke and candles referencing the burning of her mother’s home.
Russell Kaye did a performance piece around the theme of moving, with boxes of photographs and film, destroying some of them in the process.
Sandra Lee Phipps first displayed environmental self-portraits dressed in orange and then left the building to release orange balloons in an orange cloak symbolically releasing a self-image.
People let go in many ways.
What did I do?
The idea struck me immediately on Monday when we got the assignment. It was a breakthrough moment. I got confirmation that the idea was good when I tested it at home on Thursday night in the open air. The response of the other participants further confirmed my impressions. What I did for the assignment wasn’t just an experiment. It’s a new mode for my work that I’ll start presenting this summer.
I projected one of my images of a sunbow in a dark room so that you couldn’t see the image. Then I invited viewers to find and help create the image by scattering flour in the air, which created a moving 3 dimensional screen. The still two dimensional image became a moving three dimensional image. A point became a line. A circle became a cylinder. Pieces were always missing but the mind completes the unfinished. The angle of view changes the appearance dramatically.
How did I come up with this? Mix part Milton, part Speed Racer, part scientific diagrams, part Richard Serra, part James Turrell, and a lot of the work that I’m doing now. The experiment really worked for me. I’ve been wanting to do environmental sculpture for over a decade. This is practical and timely. I’ll post video of one or more on site installations on YouTube during my summer exhibition open studio event (August 2 – 3).
The big message I got? Just get started!
Stay tuned!
Check out Sean’s blog entries on the class here.
Check out fellow participant Russell Kaye’s blog here
Who’s Sean Kernan? Find out here.
Read my in depth conversation with Sean here.
Read Sean interviewing me here
Check out my creativity workshop here.
Check out Sean’s creativity workshops here.
You can take Sean’s workshop at MMW this summer!