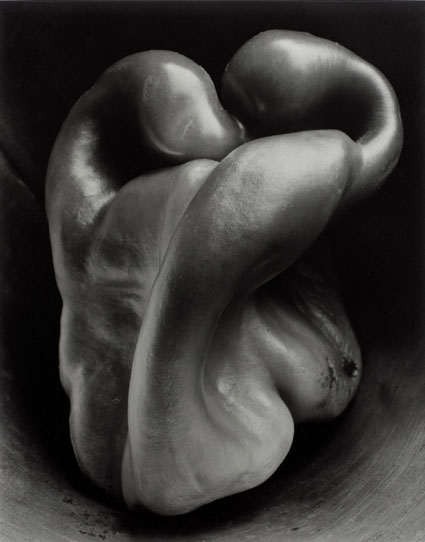 Here’s a selection of my favorite quotes by photographer Edward Weston.
“Photography suits the temper of this age – of active bodies and minds. It is a perfect medium for one whose mind is teeming with ideas, imagery, for a prolific worker who would be slowed down by painting or sculpting, for one who sees quickly and acts decisively, accurately.” – Edward Weston
“I would say to any artist: ‘Don’t be repressed in your work, dare to experiment, consider any urge, if in a new direction all the better.” – Edward Weston
“My own eyes are no more than scouts on a preliminary search, for the camera’s eye may entirely change my idea.” – Edward Weston
“The camera sees more than the eye, so why not make use of it?” – Edward Weston
“Anything that excites me for any reason, I will photograph; not searching for unusual subject matter, but making the commonplace unusual.” – Edward Weston
“Anything more than 500 yards from the car just isn’t photogenic.”  – Edward Weston
“I see no reason for recording the obvious.” – Edward Weston
“I want the stark beauty that a lens can so exactly render presented without interference of artistic effect.” – Edward Weston
“My true program is summed up in one word: life. I expect to photograph anything suggested by that word which appeals to me.” – Edward Weston
“The camera should be used for a recording of life,for rendering the very substance and quintessence of the thing itself, whether it be polished steel or palpitating flesh.” – Edward Weston
“This then: to photograph a rock, have it look like a rock, but be more than a rock.” – Edward Weston
“To compose a subject well means no more than to see and present it in the strongest manner possible.” – Edward Weston
“Now to consult the rules of composition before making a picture is a little like consulting the law of gravitation before going for a walk. Such rules and laws are deduced from the accomplished fact; they are the products of reflection.” – Edward Weston
“When subject matter is forced to fit into preconceived patterns, there can be no freshness of vision. Following rules of composition can only lead to a tedious repetition of pictorial cliches.” – Edward Weston
“One does not think during creative work, any more than one thinks when driving a car. But one has a background of years – learning, unlearning, success, failure, dreaming, thinking, experience, all this – then the moment of creation, the focusing of all into the moment. So I can make ‘without thought,’ fifteen carefully considered negatives, one every fifteen minutes, given material with as many possibilities. But there is all the eyes have seen in this life to influence me.” – Edward Weston
“I start with no preconceived idea – discovery excites me to focus – then rediscovery through the lens – final form of presentation seen on ground glass, the finished print previsioned completely in every detail of texture, movement, proportion, before exposure – the shutter’s release automatically and finally fixes my conception, allowing no after manipulation – the ultimate end, the print, is but a duplication of all that I saw and felt through my camera.” – Edward Weston
“I find myself every so often looking at my ground glass as though the unrecorded image might escape me!” – Edward Weston
“Photography to the amateur is recreation, to the professional it is work, and hard work too, no matter how pleasurable it my be.” – Edward Weston
“The fact is that relatively few photographers ever master their medium. Instead they allow the medium to master them and go on an endless squirrel cage chase from new lens to new paper to new developer to new gadget, never staying with one piece of equipment long enough to learn its full capacities, becoming lost in a maze of technical information that is of little or no use since they don’t know what to do with it.” – Edward Weston
“The photographer’s most important and likewise most difficult task is not learning to manage his camera, or to develop, or to print. It is learning to see photographically – that is, learning to see his subject matter in terms of the capacities of his tools and processes, so that he can instantaneously translate the elements and values in a scene before him into the photograph he wants to make.” – Edward Weston
“The photograph isolates and perpetuates a moment of time: an important and revealing moment, or an unimportant and meaningless one, depending upon the photographer’s understanding of his subject and mastery of his process.” – Edward Weston
“If I have any ‘message’ worth giving to a beginner it is that there are no short cuts in photography.” – Edward Weston
“…through this photographic eye you will be able to look out on a new light-world, a world for the most part uncharted and unexplored, a world that lies waiting to be discovered and revealed.” – Edward Weston
Read more photographer’s quotes here.
View photographer’s favorite quotes here.