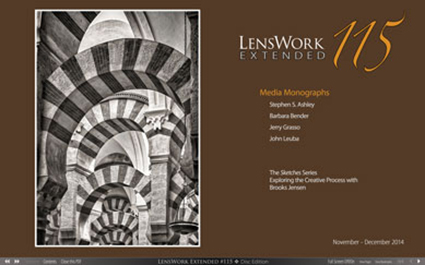 Alumni Jerry Grasso’s photographs are featured in the current issue of LensWork magazine. It’s a dream come true for him. Congratulations Jerry!

“One of my “bucket list” items was to be published in what I consider to be one of the most prestigious magazines dedicated to the promotion of fine art photography in the world today: LensWork Magazine. I have been a subscriber since 2004. In fact, I credit the podcasts of editor Brooks Jensen as one of the early influences on my artistic training. There are so many great, brief articles related to photography; more than enough food for thought.

I am humbled and honored to say that my series, “Moorish Influences”, has been accepted and will appear in the December issue #115 of LensWork. My interview and images will also appear on the Extended Edition dvd. And, one of my images even made the cover of the issue!

This series is an exploration of the progression of the impact the Moors had on Spanish architecture from 711AD to 1492AD. This impact can best be described as ordered repletions, radiating structures, and rhythmic metric patterns. These designs captured in my work are based in spirituality. The Islamic view of the world in general emphasizes and symbolizes the infinite nature of the one God. For them, there was an infinite pattern of forms that extend beyond the world and symbolizes the infinite essence of God.

My dedicated perseverance and determination continues to sustain my passion and my vision. I look forward to my continued growth as I explore new projects and experiment with new visions. And thanks for indulging me in my moment of success!”