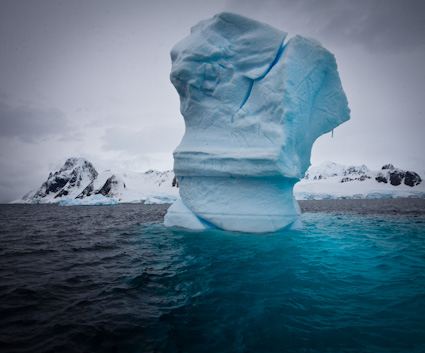 Lemaire Channel was socked in with heavy snow as we passed through it. Only those who had been there before, knew the soaring majesty of the peaks above hidden by the low lying clouds. Having been through the Lemaire Channel four times now, our 2005 expedition passage, which was full of hours of riotous color, was clearly an exception, not the rule.
At the far end of the Lemaire Channel we turned into Plenneau Bay, the iceberg graveyard. The ice was good, but not extraordinary like our 2007 cruise. Snow filled the air making shooting conditions challenging. We traversed the bay for hours in separate zodiacs exploring the largest masses of ice that weren’t surrounded by brash ice. Snow covered, this ice, grounded in the shallows of the bay, offered altitude and a side variety of shapes, lines, and textures.
After lunch, we moved on to nearby Petermann Island, the area’s largest colony of Adelie Penguins at the gateway to the Pennola Strait strewn with large masses of ice. The sun made a feeble attempt to come out for the following hours, a tiny omnipresent spot, making a wonderful counterpoint in the otherwise flat gray skies, still capable of casting light upon the watery sculptures we chased so feverishly. Again, those of us who elected not to land enjoyed the luxury of extended zodiac cruises. For hours, we chased pyramids, caryatids, griffins and a riot of other fantasies frozen in ice.  This afternoon and Paradise Bay were the best sessions of the whole trip.
Incoming sea ice forced us to carve our way back through the Lemaire Channel through more katabatic winds, gusting up to 50 mph. With an eye to our voyage home, we moved north west to find an evening’s shelter and position ourselves for our final day of cruising.
Andy Biggs made a quick presentation on integrating NIK software into a digital workflow. Seth followed with an extended presentation on advanced Lightroom processing techniques and leveraging the power of Presets.