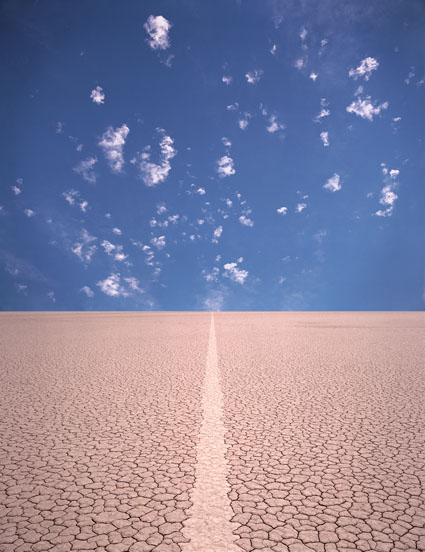 What You Eliminate Is Just As Important As What You Include

You may have heard the phrase, “You’re responsible for everything that’s included within the frame of your images.” Few stop to consider that this also means, “You’re responsible for everything that’s not included within the frame of your images.” We can eliminate objects in the frame in many ways – moving the frame, moving objects, and retouching are the three most common and progressively make pre-visualization more challenging. All three practices came into play while making this image.
One day, I drove to a remote corner of California’s Death Valley National Park called the Racetrack a location famous for the unusual paths that rocks made on the clay playa’s time-cracked mud. Theories about the cause of this mysterious phenomenon include ice, wind, magnetism, and extraterrestrials. The playa was wet when I arrived and couldn’t be walked on without leaving new tracks. (The park requests that people not make new tracks and only walk on the playa when it is dry.) So, I made exposures without tracks and later made new ones virtually, digitally removing cracks from the image selectively to form the appearance of a path. By removing something old you can create something new. Elimination can be more than a matter of hiding, it can also be about revealing.
The art of composition and storytelling is indeed as much about what is not included as what is included. Making these decisions is more than choosing an angle of view, it’s the beginning of a point of view.
Questions
How many ways and to what end do you typically eliminate things from your images?
How many other practices of elimination can you imagine?
How would practicing other forms of elimination change the nature of your images?
The Story Behind The Story Behind The Image
(Years later, photographer Jay Maisel commented on this image, “That’s a good one. I’ve got one just like it. Only, mine’s more pure. I drove my car out on the mud.” (I assume he did this at another location.) “Mine’s more ‘environmentally friendly.’” I responded, only half in jest, as I consider a majority of my work a form of virtual environmental sculpture. I do this kind of work virtually and ephemerally because I’m working in a culture that doesn’t have a common land use ethic and I don’t want to impose my interpretation of the land on others and future generations, particularly in pristine places, whether public or otherwise.)
Find out more about this image here.
Read more The Stories Behind The Images here. 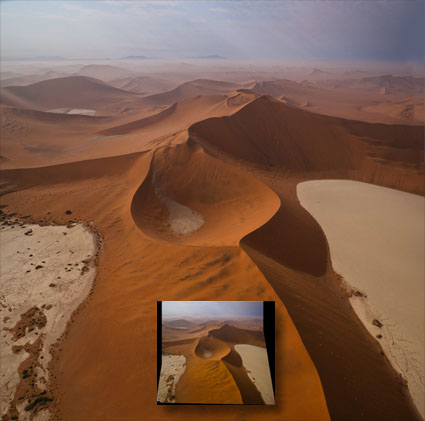 As visual communicators, we’re responsible for everything that’s in the frame; we’re also responsible for everything that’s not in the frame. Deciding what’s in the frame and what’s out is a critical decision that can make or break an image. Here are two essential framing strategies.
1.?Use the frame to eliminate distracting information around a subject.
Take extra care with image information that touches the frame, as it will draw extra attention. Do this with significant compositional elements.
2.?Eliminate space around a subject to focus a viewer’s attention.
A lot of space between the subject and the frame can be used to call on psychological associations with space, such as freedom or isolation. Some space between the subject and the frame can give the appearance of the subject resting gracefully within the frame. Touching the subject with the frame strongly focuses the attention of the viewer and may seem claustrophobic. Cropping the subject with the frame can focus the attention of the viewer on specific aspects of the subject and/or give an image a tense quality, evoking evasion and incompleteness—this often seems accidental if less than half the subject is revealed.
There’s more than one way to apply these strategies. While cropping techniques are simple to practice, the reasons for their application and the choices made about how to apply them, as well as the final effects, may be exceptionally complex. You have two choices ..
1. Reposition the frame before exposure.
2. Contract the position of the borders of an image after exposure
If you plan to retouch, you’ll frame and crop differently …
Read more at Digital Photo Pro.
Find more digital photography techniques here.
Learn more in my digital photography worskhops.