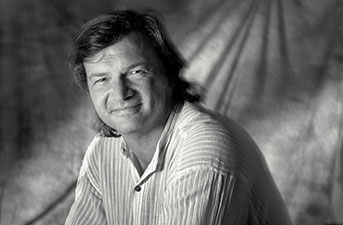 For over thirty years, Rainier has been in search of the meaning of the mask. What began as a thorough visual photographic documentation of the traditional mask rituals of New Guinea developed into a voyage of discovery that took him around the world photographing traditional masks and mask traditions - from the steppes of Mongolia to the jungles of South America, from the savannahs of West Africa to the ghats of India and the high Himalayan mountain monasteries of Tibet and Bhutan, from “Day of the Dead” festivals in Mexico to the lands of the First Nation tribes of North America and from the temples of Sri Lanka and Bali to the Alpine villages of modern Europe. Edited from thousands of hours of video and still images, Mask is one of the most definitive documentations of traditional masks as they are still danced within the spiritual realm of today’s enduring Indigenous cultures.

Chris Rainier is a master at creating powerful images that document endangered traditional cultures and rituals still alive today. His images propel us to the edge of the map, illuminating societies vulnerable to powerful changes unfolding in the 21st Century. Rainier was a former photographic assistant to Ansel Adams, the noted landscape photographer and conservationist. For over twenty years, Rainier has been a National Geographic Fellow, Explorer and photographer, co-directing a number of programs at the Society focused on documenting endangered traditional languages and knowledge. He is the Director of The Cultural Sanctuaries Foundation and is a Fellow of The Royal Geographical Society in London.

What's the best thing about photography?

The ability for the photographic medium to be an archive for future generations. With a world rapidly doing away with the traditions and culture from our past, photographs taken today can be a haunting reminder of what we have lost.

What's the thing that interests you most about photography?

To express emotions drawn from our subconscious and to bring into reality thoughts, expressions and emotions beyond our imagination.

What's the thing that interests you most about your own photographs?

I have dedicated my life to documenting the world's last wilderness areas and the traditional cultures that are left on the planet. I look at images I have taken in the past and realize that where once there was only wilderness, there is now a shopping mall or that where once there was a vibrant traditional community, there are now only abandoned villages with communities forced to move to the city and culture fading away. The photographs have become an archive and I passionately believe that it is key for us to document these places and cultures before it might become too late.

Who were your early photographic influences?

I had the great honor and good fortune to work for Ansel Adams as his last photographic assistant in the early 1980s. Not only was his photography a profound influence - but as key was his use of photography as a social tool. Also, my great aunt was a noted composer in England - who counted Henry Moore and Barbara Hepworth among her many friends. I spent long hours with her and her artistic peers as a young man. Their deeply spiritual and artistic sensibility has been a profound influence on me as an artist.

Who are your photographic influences now?

Music and spiritual development have always had, and continue to have, a deep influence on me.  As I get older and further refine my photographic evolution, I find deeper clarity and, if you will, an economy of moves to my photographic journey.

Who are your non-photographic influences now?

Taking the time to put down the camera - and quietly listen - allows me to re-discover what I do not see when I am trying sometimes too hard to make meaningful images.

What's the most inspiring work of art you saw recently?

A remarkable sunset I just experienced in Bhutan where I am working on a long term project. Nature can provide the most remarkable art in the world.

What's the best thing about gear?

In its switch from analog to digital, it has made the total control of the medium truly remarkable.

What's the worst thing about gear?

When we assume that by improving the technology, we are making it better. Sometimes we take something really good and over-design it and destroy its beauty.  I have really begun at this stage of my career to simplify and to reduce myself to the use of one lens and one camera body.

How do you know when an image is good?

I pre-visualize most of the images I take. I see it in mind's eye before I take the picture. So when the actual image appears in the screen, it comes to me as something that I am already familiar with and is an affirmation of the cause and effect of clear intention.

How do you know when an image is great?

I am not sure that any image is great.  That is decided by the viewer. I merely do my job by defining clearly what my intention is as a visual storyteller.  The communication of photography is actually not so much what I shoot - but rather what the viewer actually sees.  I am successful when the viewer feels the same emotion I did when I took the image.

What's the most useful photographic mantra?

Put off short terms gains for long term goals. Visualize where you want to be in twenty years and keep your eye on that visualization. Visualize what role you want your photography to play and then stay in clear focus.

Do you practice another art form? (If so, which?)

Surfing, skiing and listening to really good music. They keep me young, happy and free…

What benefits do you get from (this/these) other art form/s?

What was the most significant visual moment in your life?

When finally after much practice, I took an image that spoke of emotions unseen and spiritual beliefs un-articulated.

Which was the most important image to you that got away?

It happens every day. Photography has become a form of patience and discipline always to reach for images that might allude you for years.

What failure did you learn the most from?

Every failure. A failure is only a failure if you do not learn from it.

What accomplishment are you most proud of?

Using photography as a social tool in an effort to make the world a better place and a place where my son can still experience the planet and its remarkable traditional culture as it once was.

What's the thing you most hope to accomplish?

That my photography one day can serve as a catalyst for traditional cultures once again to dance the sacred dance that may have long been forgotten.

If you had to do it all over again, what would you change?

Worked harder - and gone to a number of scared places that I got to too late: where the bulldozer had already paved the holy land and the chainsaw had already cut the forest and the sacred dance masks were no longer worn.

If you had another life to live a completely different life, what would you choose to do?

To be an explorer with a camera alive in the 18th century before white man had arrived in many places on the planet. To sit at the feet of Siddhartha, to go on pilgrimage to Mecca, to have danced the sacred potlatch dance with the chief of the Haida Nation long before white man made their religion and language illegal...

What's photography really all about?

In the end, taking a photograph becomes an act of taking a self-portrait. Regardless of where the camera is pointed, it reflects who I am.

How did photography change the world?

As a form of self-expression and a tool for social justice.

How did photography change your world?

It became, and still is, my tool to express the way I see the world and how I want to be part of saving it.

What's the best thing about our times?

What keeps you up at night?

What gets you going in the morning?

The same as above.

The Art of Stillness by Pico Iyer.

What's your favorite piece of music?

The one that works for a particular moment.

What's your idea of perfect happiness?

What is your greatest fear?

Which historical figure do you most identify with?

The leader who leads us back from the brink and re-imagines the world not in terms of survival but rather as a world full of hope, compassion and abundance.

What is your favorite journey?

Turning down the drive way to my home in the mountains above Santa Fe and seeing the fluttering prayer flags and hearing the wind passing through the pines along the ridge top.

What is your greatest regret?

That I was not born in an earlier time.

What do you consider your greatest achievement?

Staying alive in a lifetime of risk

What's your most treasured possession?

A small talisman of tied rope my son gave me as a reminder of him when I am traveling. I take it everywhere I go to keep him close.

What is your favorite occupation / past time?

Sitting quietly in a forest

What do you most value in your friends?

Compassion and patience with my insane travel schedule.

Those not busy being born are busy dying. You only get one chance to truly to be alive on this planet - this is not a dress rehearsal - so attain your goals.

What other talent would you most like to have?

To sit still more often and for longer periods of time.

Having taken all the photographs that I possibly could have taken in my life and to be surfing on a beautifully still day at sunrise, a slight offshore breeze allowing the waves to feather gently above my head - surrounded by the most remarkable golden light with the people I love closely around me…