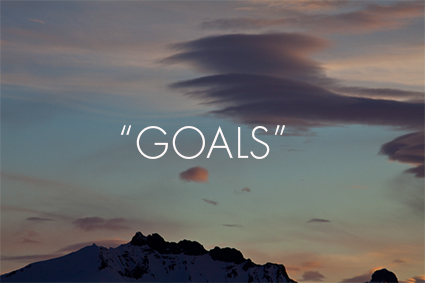 Here’s a selection of my favorite quotes on goals.
“There is one quality more important than “know-how” and we cannot accuse the United States of any undue amount of it. This is “know-what” by which we determine not only how to accomplish our purposes, but what our purposes are to be.” – Norbert Wiene
“I respect the man who knows distinctly what he wishes. The greater part of all mischief in the world arises from the fact that men do not sufficiently understand their own aims. They have undertaken to build a tower, and spend no more labor on the foundation than would be necessary to erect a hut.” John Wolfgang von Goethe
“Vision without action is a daydream. Action without vision is a nightmare.” – Japanese Proverb
“You can’t hit a target you cannot see, and you cannot see a target you do not have.” – Zig Ziglar
“If you aim at nothing, you will hit it every time. ” – Zig Ziglar
“When a man does not know what harbor he is making for, no wind is the right wind.” – Lucius Seneca
“If you don’t know where you are going, you might wind up someplace else.” Yogi Berra
“This one step – choosing a goal and sticking to it – changes everything.” – Scott Reed
“You must take action now that will move you towards your goals. Develop a sense of urgency in your life.” – H. Jackson Brown, Jr.
“Begin with the end in mind.” Stephen Covey
“If what you are doing is not moving you towards your goals, then it’s moving you away from your goals.” – Brian Tracy
“Goals are dreams with deadlines.” – Diana Scharf Hunt
“Goals help you channel your energy into action.” – Les Brown
“I don’t care how much power, brilliance or energy you have, if you don’t harness it and focus it on a specific target, and hold it there you’re never going to accomplish as much as your ability warrants.” – Zig Ziglar
“The shortest distance between two points assumes you know where you’re going.” – Robert Brault
“A straight path never leads anywhere except to the objective.” – Andre Gide
“The road leading to a goal does not separate you from the destination; it is essentially a part of it.” – Charles DeLint
“You must have long-range goals to keep you from being frustrated by short-range failures.” – Charles C. Noble
“Obstacles are what you see when you take your eyes off your goals.” – Anonymous
“We are kept from our goal not by obstacles but by a clear path to a lesser goal.” – Robert Brault
“When it is obvious that the goals cannot be reached, don’t adjust the goals, adjust the action steps.” – Confucius
“Many are stubborn in pursuit of the path they have chosen, few in pursuit of the goal.” – Friedrich Wilhelm Nietzsche
“One half of knowing what you want is knowing what you must give up before you get it.” – Sidney Howard
“Goals allow you to control the direction of change in your favor.” – Brian Tracy
“A goal is not always meant to be reached, it often serves simply as something to aim at.” ― Bruce Lee
“Sometimes the path you’re on is not as important as the direction you’re heading.” – Kevin Smith
“It is good to have an end to journey toward; but it is the journey that matters, in the end.” ― Ernest Hemingway
“Establishing goals is all right if you don’t let them deprive you of interesting detours.” – Doug Larson
“Success is 10% inspiration, 90% last-minute changes.” – Anonymous
“Map out your future, but do it in pencil.” – Jon Bon Jovi
“Without some goals and some efforts to reach it, no man can live.” – John Dewey
“What keeps me going is goals.” – Muhammad Ali
“If you’re bored with life – you don’t get up every morning with a burning desire to do things – you don’t have enough goals.” – Lou Holtz
“People are not lazy. They simply have impotent goals – that is, goals that do not inspire them.” – Tony Robbins
“What you get by achieving your goals is not as important as what you become by achieving your goals.” – Henry David Thoreau
“Goals determine what you’re going to be.” – Julius Erving
“If you go to work on your goals, your goals will go to work on you. If you go to work on your plan, your plan will go to work on you. Whatever good things we build end up building us.” – Jim Rohn
“If you set goals and go after them with all the determination you can muster, your gifts will take you places that will amaze you.” – Les Brown
“Arriving at one goal is the starting point to another.” – John Dewey
Find more Creativity Quotes here.
Read more quotes daily on Twitter and Facebook.