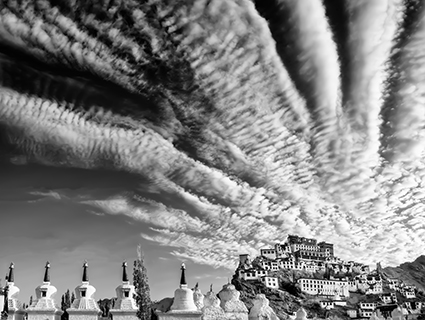 In the summer of 2013 I had the fortune of travelling to Ladakh, India, a remote Himalayan kingdom that is now far Northwestern India, bordered by Pakistani controlled Kasmir and Chinese controlled Tibet.  Ladakh’s high desert rises from valley floors at 12,000 feet to the mountain peaks at 20,000ft. Water from the Indus River is skillfully directed through lush fields then on to irrigate countless other valleys in India. The Ladakhis live in carefully organized communities of adobe homes where they maintain cattle and yak, pashmina goat herds, make mud bricks for export, hone their traditional crafts, keep cultural ways of life and practice an intense spirituality.  It is a place where monasteries seem to float above military bases and vast expanses that shimmer in the intense, clear light. Translated as “The Land of High Passes” Ladakh is a region of sunshine and snow, of dark temples and bright spirits.

I happened to meet fellow photographer Christopher Michel in Delhi when he was doing what he does best, photographing people with his happy-go-lucky-how-could-you-say-no direct approach.  We happened to have the same somewhat unusual camera and lens combo so I struck up a conversation.  Little did I know we would be traveling to the same place and often shooting standing shoulder to shoulder with several thousand other people. 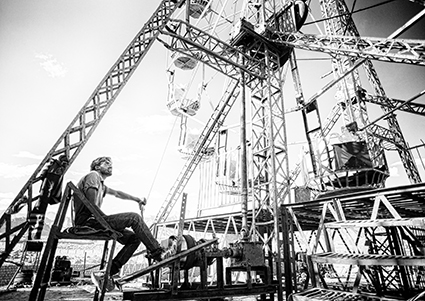 One hundred and fifty thousand ethnic Tibetans were gathering in Ladakh for the ancient Kalachakra ceremony, a two thousand year old ten-day teaching given by Tenzin Gyatso, the 14th Dalai Lama.  I went as a student of life, to see and experience with camera in hand but no specific assignment or shot list.  It was not easy.  The mid-summer heat of India was as hard on the equipment as it was on the attendees.  It was difficult to breathe, move, and photograph in the dust, smoke, heat and an international crowd of so many, packed into a tight space and hurrying over long distances to get there.  There were near mob-scene moments as well as times of great kindness that transcended language barriers.  The intense sun cast deep shadows in the desert while the traditional adobe architecture had dark interiors often only illuminated with butter lamps and a single strong shaft of light.  The experience was overwhelming and required great openness to each moment, the physical stamina to endure heat and altitude as well as the willingness to play well with others.

Every extra moment from sunrise to starry night was spent exploring the stupa fields, monasteries, city of Leh and village life with friends met along the way.  Chris’ focus on the essence of each moment was an inspiration and his photographs reflect his incisive eye, whether the subject was people or place. During the two weeks in Ladakh we did not share work or even review our own images.  There was limited electricity for anything beyond charging batteries.  Several weeks later I happened to come across a blog article about Chris’ work in Ladakh and immediately suggested a collaborative show to benefit Tibetan culture at Tibet House US.  Fortunately Chris agreed to my out-of-the-blue request and the curator of Tibet House US, Zola Nyambuu, was happy with the show we proposed.  So began the coincidental collaboration of “Envisioning Ecstasy.”

The show has forty black and white photographic prints of landscape, portraits and details of Ladakh during the Kalachakra.  These range from arid desertscapes to lush irrigated fields reflecting the mountains.  There are images from the Kalachakra as well as incongruous graffiti overlooking the capitol city, Leh.  Curious camels, luminous nightscapes and the famously painted Indian trucks balance the spiritual iconography.  A traveling circus with a lotus-decorated ferris wheel loomed above the vast desert providing an unforgettable personal and photographic experience.

“Envisioning Ecstasy” also has a conceptual aspect in the form of eleven large-scale lumenographic prints based on illustration based photographs originally sketched during the Kalachakra.  Two projected animations bring these drawings to life and complete the show. The story behind many of the documentary images was captured in Chas Curtis’ keen videograpy.  Chas’ evocative timelapses and captivating clips from ceremony to circus were seamlessly edited into a luminous video interview by Kyle Ruddick. The video is a multi-media presentation of “Envisioning Ecstasy” and will be screened at the opening. The show is accompanied by a catalog, Envisioning Ecstasy and a clothbound book, 108 Visions : Ladakh During the Kalachakra, thoughtfully designed by Michael Motley, which offers glimpses of the journey from small details to sweeping vistas.  Books and print sales benefit Tibet House US, which brings the concept of collaboration full circle. 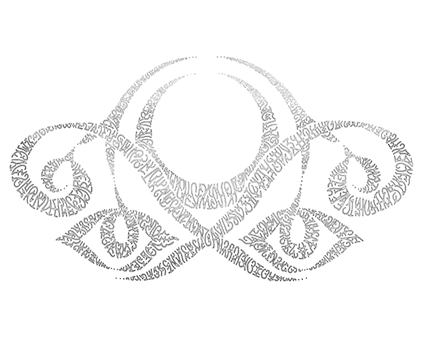 All of this work was greatly enhanced by John Paul and Seth’s dynamic duo Art of Processing and Art of Creativity. The workshops are an intense immersive experience for honing artistic vision, voice and direction.  And of course any workshop with JP and Seth is a lesson in that all important art of playing well with others, one of my favorite photographic mantras.  Photography is often seen as a solitary pursuit and though it has it’s quiet moments, communal creativity widens the collective perspective. This golden rule underpins the entire show of “Envisioning Ecstasy.”

Learn more about Envisioning Ecstacy on The Leica Blog.