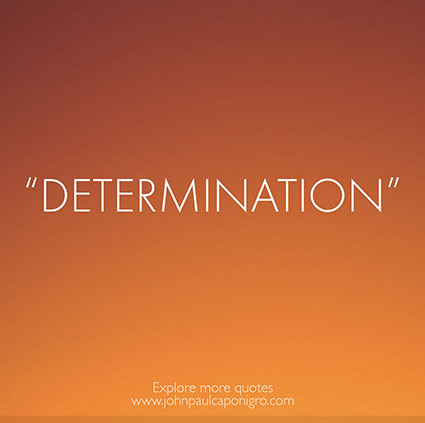 Enjoy this collection of quotes on Determination.
“A great book begins with an idea; a great life, with a determination.” – Louis L’Amour
“Nothing in this world can take the place of persistence. Talent will not; nothing is more common than unsuccessful people with talent. Genius will not; unrewarded genius is almost a proverb. Education will not; the world is full of educated derelicts. Persistence and determination alone are omnipotent. The slogan “press on” has solved and always will solve the problems of the human race” – Calvin Coolidge
“Desire is the key to motivation, but it’s the determination and commitment to unrelenting pursuit of your goal – a commitment to excellence – that will enable you to attain the success you seek.” – Mario Andretti
“If your determination is fixed, I do not counsel you to despair. Few things are impossible to diligence and skill. Great works are performed not by strength, but perseverance.” – Samuel Johnson
“Perseverance, secret of all triumphs.” – Victor Hugo
“Genius is 1 percent inspiration and 99 percent perspiration.” ― Thomas A. Edison
“The difference between the impossible and the possible lies in a man’s determination.” – Tommy Lasorda
“What this power is, I cannot say. All I know is that it exists…and it becomes available only when you are in that state of mind in which you know exactly what you want…and are fully determined not to quit until you get it.” – Alexander Graham Bell
“It had long since come to my attention that people of accomplishment rarely sat back and let things happen to them. They went out and happened to things.” ― Leonardo da Vinci
“Let us not be content to wait and see what will happen, but give us the determination to make the right things happen.” – Horace Mann
“Once you make a decision, the universe conspires to make it happen.” ― Ralph Waldo Emerson
“Small things get big over time.” – Austin Kleon
“You can find inspiration from others but determination is solely your responsibility.” – Dodinsky
“Nothing great will ever be achieved without great men, and men are great only if they are determined to be so.” – Charles De Gaulle
“Those who attain any excellence commonly spend life in one pursuit; for excellence is not often granted upon easier terms.” – Samuel Johnson
“I never could have done what I have done without the habits of punctuality, order, and diligence, without the determination to concentrate myself on one subject at a time.” – Charles Dickens
“Our greatest weakness lies in giving up. The most certain way to succeed is always to try just one more time.” – Thomas A. Edison
“People of mediocre ability sometimes achieve outstanding success because they don’t know when to quit. Most men succeed because they are determined to.” – George Allen
“It’s not that I’m so smart, it’s just that I stay with problems longer.” – Albert Einstein
“The difference between a successful person and others is not a lack of strength, not a lack of knowledge, but rather a lack in will.” ― Vince Lombardi Jr.
“A few fly bites cannot stop a spirited horse.” ― Mark Twain
“What counts is not necessarily the size of the dog in the fight – it’s the size of the fight in the dog.” – Dwight D. Eisenhower
“The man who can drive himself further once the effort gets painful is the man who will win.” – Roger Bannister
“The thing about a hero, is even when it doesn’t look like there’s a light at the end of the tunnel, he’s going to keep digging, he’s going to keep trying to do right and make up for what’s gone before, just because that’s who he is.” ― Joss Whedon
“It’s not about money or connections — it’s the willingness to outwork and outlearn everyone … And if it fails, you learn from what happened and do a better job next time.” – Mark Cuban
“The price of success is hard work, dedication to the job at hand, and the determination that whether we win or lose, we have applied the best of ourselves to the task at hand.” – Vince Lombardi
“Learn how to be happy with what you have while you pursue all that you want.” – Jim Rohn
“I am only one, but I am one. I cannot do everything, but I can do something. And because I cannot do everything, I will not refuse to do the something that I can do.” ― Edward Everett Hale
“Real leaders are ordinary people with extraordinary determination.” – Unknown
“A dream doesn’t become reality through magic; it takes sweat, determination and hard work.” – Colin Powell
“The foolish man seeks happiness in the distance. The wise grows it under his feet.” ― James Oppenheim
“The truest wisdom is a resolute determination.” – Napoleon Bonaparte
“It will never rain roses: when we want to have more roses, we must plant more roses.” ― George Eliot
“It has never been my object to record my dreams, just the determination to realize them.” – Man Ray
“There are only two mistakes one can make along the road to truth; not going all the way, and not starting.”– Buddha
“Obstacles don’t have to stop you. If you run into a wall, don’t turn around and give up. Figure out how to climb it, go through it, or work around it.” – Michael Jordon
“Fall seven times, stand up eight.” – Japanese Proverb
“Never give in. Never give in. Never, never, never, never — in nothing, great or small, large or petty — never give in, except to convictions of honor and good sense. Never yield to force. Never yield to the apparently overwhelming might of the enemy.” ― Winston S. Churchill
“We will either find a way, or make one.” – Hannibal
“The question isn’t who is going to let me; it’s who is going to stop me?” – Ayn Rand
Explore The Essential Collection Of Creativity Quotes here.
View The Essential Collection Of Creativity Videos here
Discover more quotes in my social networks.