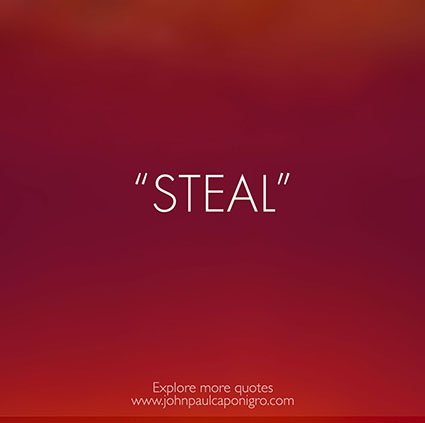 Enjoy this collection of quotes on stealing.

“If you’re going to steal, steal from the best.” – Woody Allen

“To steal ideas from one person is plagiarism; to steal from many is research.” – Anonymous

“Somebody told me long ago that in acting, it’s okay to steal, just steal from the best.” – Nathan Fillion

“About the most originality that any writer can hope to achieve honestly is to steal with good judgment.” – Josh Billings

“Gary Oldman is impossible to steal a movie from. He’s such a great actor.” – Kevin Bacon

“I think all comics borrow from each other. Only a few have an original voice, and I wasn’t one of them. In the end, I couldn’t figure out who to steal from, so I stopped doing it.” – Steve Buscemi

“Stealing things is a glorious occupation, particularly in the art world.” – Malcolm Mclaren

“The only way you can get good unless you’re a genius is to copy. That’s the best thing. Just steal.” – Ritchie Blackmore

“The number one rule of thieves is that nothing is too small to steal.” – Jimmy Breslin

“It’s nice to sometimes get things out of life, rather than stealing from other artists. I’m trying to steal from the real people.” – John Hawkes

“There’s no shame in stealing – any actor who says he doesn’t is lying. You steal from everything.” – Benedict Cumberbatch

“I steal from every movie ever made.” – Quentin Tarantino

“There’s a lot for screenwriters to steal from songwriters, in terms of getting to the point.” – Paul Thomas Anderson

“Nothing is original. Steal from anywhere that resonates with inspiration or fuels your imagination. Devour old films, new films, music, books, paintings, photographs, poems, dreams, random conversations, architecture, bridges, street signs, trees, clouds, bodies of water, light and shadows. Select only things to steal from that speak directly to your soul. If you do this, your work (and theft) will be authentic. Authenticity is invaluable; originality is nonexistent.” – Jim Jarmusch

“A real writer learns from earlier writers the way a boy learns from an apple orchard-by stealing what he has a taste for and can carry off.” – Archibald MacLeish

“I don’t want to steal anybody’s story. I very much want to use the stories that I hear to get lost in my mind, to tell a larger story.” – David Levithan

“People see the ‘steal’ and they forget the ‘like an artist’ part.” – Austin Kleon

“Don’t sell yourself short. No one will value you. Set a fair price for you, your book, your services, whatever it is that you have to offer. Most of us set way too low a price. Put it a little higher than you would normally be inclined to do. The worst that can happen is someone will come along and steal it.” –  John Kremer

“If you have to lie, cheat, steal, obstruct and bully to get your point across, it must not be a point capable of surviving on its own merits.” – Steven Weber

“If you ever have the good fortune to create a great advertising campaign, you will soon see another agency steal it. This is irritating, but don’t let it worry you; nobody has ever built a brand by imitating somebody else’s advertising.” – David Ogilvy

“Don’t worry about people stealing your ideas. If your ideas are any good, you’ll have to ram them down people’s throats.” – Howard Aiken