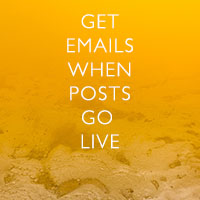 My series Refraction has challenged the way I think in so many ways from the moment the first image appeared.
The series is informed by modern physics and the nature of light. An observer influences what’s observed. The questions they ask and the way they ask them influences the answers they get. The universe is similar to a holograph in that information in one location can be found in another simultaneously. Two people in different positions can see the same rainbow as existing in different locations. Perception is relative, to some degree.
In this series, I found that multiple compositions that worked were possible and that it seemed appropriate for the first time to present them simultaneously. So I produce ‘quantum editions’ for this series. People purchasing a given print can choose both which and how many variations they want produced for them.
I’ve never seen this done before –  but that’s doesn’t dissuade me.
I like to innovate!
See more new 2011 images here, here, and here.
The exposures for this image were made in Iceland.
Learn about my Iceland digital photography workshops here.