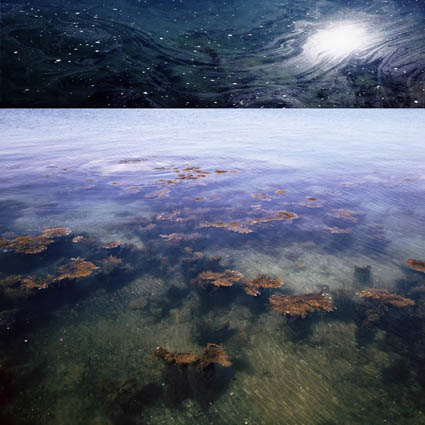 Writing about your work can often be a rewarding experience. It can reveal themes that might not be obvious at first glance. When it’s really working there’s as much discovery for the writer and the reader. Here’s an excerpt from a statement I wrote for my book Adobe Photoshop Master Class.
“Photographs are a kind of memory. Photographs are representations of memories. Often we don’t realize how important the memories of their makers are in establishing our relationships to them. Part of their authenticity is derived from the testimony of the witnesses who made them. It’s that testimony that would stand up in a court of law more strongly than the data in the document. Clearly the two are inextricably linked. When a photograph’s maker is gone, what happens to that testimony? How often do we presume too much?
This photograph is a representation of a memory and a feeling. While it is part fact, it is also part fiction. It is only partially objective; it is clearly subjective. Though it may not be as clearly stated in many photographs as it is here, I think most photographs are. The larger metaphor this image portrays — “as above, so below,” once latent now overt — suggests a relationship that cannot be grasped from one vantage point at one moment in time. It can only be found in the comparison of many memories — some above, some below, some by day, some by night.”
Read the rest of the statement here.
Read more of my statements here.

Tonight from 7-9 in San Francisco at the Academy of Arts, I lecture on my work and creative process with an eye towards advances in technology. The lecture is free and open to the public – sponsored by Canon.
Here’s an excerpt.
I often encounter resistance to new practices in photography. Some say, “You can’t do that.” I reply, “I just did.” They respond, “But that’s cheating.” I counter “Whose game are you playing?”
There’s no such thing as cheating in the creative arts. There is such a thing as misrepresentation. As creators we all share a responsibility to disclose our process so that viewers can react in informed ways. This has never been more true than today, where technology challenges many of the assumptions that were almost too easy to make in the past. This cultural dialog is an important part of understanding where we are today, how we got here, and where we may be going.
Listen to my artist’s statements here.
See my work here.

Listening to the Land 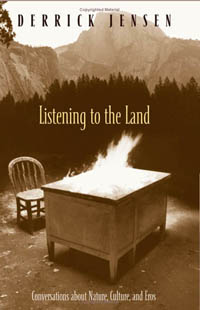 When was the last time you were truly inspired something you read?
When was the last time you found inspiration for you work when you weren’t working?
You know those times when you stumble on a book suddenly that has such a sympathetic viewpoint to your own that you instantly pick it up and devour it? It happened to me yesterday. In a coffee shop, on a much needed day off, I found one – Listening to the Land.  (Coincidence, Synchronicity, or Sympathetic Vibration? This summer I wrote a short statement called The World is Speaking. Read my Statements here.) Listening to the Land is a very interesting collection of interviews with Derrick Jensen. “In this far-ranging and heartening collection Derrick Jensen gathers conversations with environmentalists, theologians, Native Americans, psychologists, and feminists, engaging some of our best minds in an exploration of more peaceful ways to live on Earth.” What drew me in instantly was Terry Tempest Williams’ discussion of the erotic in reference to environment. Here are some excerpts.
“Erotic is what those deep relationships are and can be that engage the whole body – our heart, our mind, our spirit, our flesh. It is that moment of being exquisitely present. END_OF_DOCUMENT_TOKEN_TO_BE_REPLACED 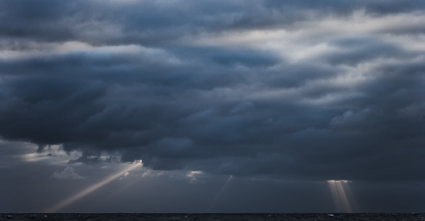 Writing is an integral part of my creative process. First, writing helps me clarify my thoughts and feelings about my work. Then, it helps me communicate about it to others.
Find out how writing can help you in my free Creativity PDFs.
I’ve written three new Artist’s Statements this summer …
The World is Speaking
Resacralizing Nature
Pilgrimage
You can read them here.
You can hear me speak about my new work in person at 2 pm during my Annual Exhibit 8/2-3.
Order your copy of my new Antarctica book here.
Stay tuned for more content from this weekend with multiple posts each day.
New images will be posted tonight!

This was originally written this for my book Adobe Photoshop Master Class. There’s much more to say about this image. That’s as it should be. Words work best when they open doors, not when they shut them.
I had been pursuing seascapes, studies in proportion and color, visual equivalents of music: sonatas, preludes, etudes, and variations. It was time for a nocturne.
Generally my preliminary studies, in pastel, contain only a little variation. They match two tones and two colors. This helps strip the image down to its bare essentials making visible the dominant relationship without a great deal of distracting variation. Everything is played against those two notes. They set the key of the piece. Proportion is critical.
In Nocturne xii, detail is equally important. The tiny points of light that shimmered across the water looked like stars in the sky. While the stars in the sky moved so slowly that they looked still, these came and went in the wink of an eye. There are two different senses of time at work here. Both are brought to the same time, the unchanging time of this image. The stars in the sky are separated by vast distances, while the points of light on the surface of the water are all held on a single plane. One is deep, the other flat. If you see the surface of the atmosphere, you can’t see the stars, while if you can’t see the surface of the water, the starry reflections disappear. Surfaces reveal and conceal.
They say we can’t see color at night. By comparison to day, I suppose that’s true. However, if there’s a significant amount of light, there are wonderful colors to be found at night.
Many people don’t consider black or white to be colors. It’s true that a pure black has no bias toward one hue or another. It’s also true that every hue shares something in common with every other hue; they coalesce around a scale of brightness (dark to light). Some consider black a color for color is what we see. Aside from the one pure black, there are many blacks that have subtle tints of one hue or another. Each has a character all its own.
I’ve been interested in making images of night for some time. My initial efforts with paint were frustrating. I couldn’t see the image and the subject at the same time. This forced me to paint from memory. This is an attempt to make a photograph from memory. A traditional photograph would not have rendered the night as I experience it. If I had made this image from an exposure at night, the waves would likely have turned to mist. The long exposure needed would render the water as pure motion. Like my preliminary studies, there would be a definite horizon line but little detail. It would be soft but not still.
Rather than deferring to the vision of the camera eye, I’m now able to render either what my eye has seen or what my mind’s eye can envision.
Read more Statements here.
See more images here.