You can get over 100 images in 10 free portable galleries.
Enjoy and share these tiny PDFs anytime anywhere with anyone. 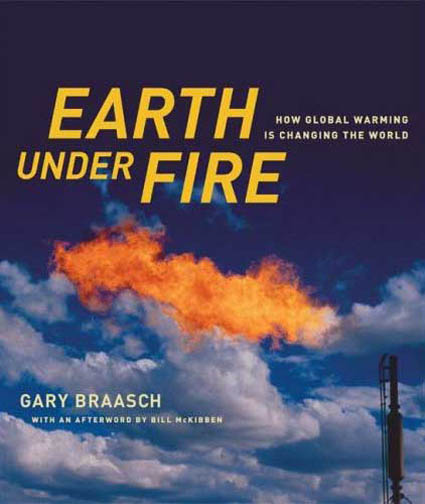 Gary Braasch has photographed climate change more extensively than any other photographer. His book Earth Under Fire is a definitive work on the subject.
Find out about Gary Braasch here.
Find out about Earth Under Fire here.
Gary and I have been talking at length on many subjects. Here’s the first installment of our conversations.
John Paul Caponigro
Tell me about climate change.  And tell me about your book – Earth Under Fire.
Gary Braasch
In June 1997 I was stuck in a cold tent on the Alaska tundra with fellow nature photographer Gerry Ellis.  We had come to photograph caribou and other tundra animals, but for these weeks, anyway, we saw very little.  But while we read our books in the tent and talked of life and photography, we also chatted about the major issues in nature and conservation.  What were we going to do in coming years: what locations, what species, what issues were going to be the most important to photograph?.  And also, who was going to hire, publish and pay us for this? END_OF_DOCUMENT_TOKEN_TO_BE_REPLACED

We need to shift our focus away from politicians to scientists – the real experts. I’ve encountered professional scientists, from climatologists, geologists, glaciologists and biologists, to name a few, who have shared data that indicates the polar regions are undergoing rapid change and this heralds dramatic global changes. Though there’s debate about why things are changing, how much they’re changing, how fast they’re changing, and whether we’ve seen this kind of change before, I have yet to meet a single scientist who debates that climate change exists. The scientific communities understanding of climate change is advancing at a very rapid rate; old models and predictions are continually being updated based on better and better information. There is growing concern in the scientific community. We need to make funding relevant scientific research to get more high quality information one of our highest priorities.
Publicly, the debate has shifted from “Does climate change exist?” to “How much does man contribute to climate change?”. We need to seriously consider another very practical issue, whether climate change is influenced by man, a little or a lot, given that it exists, “What are we doing to prepare for climate change?” Climate always changes. And climate changes human history.

Find information from the experts here.
Find what you can do to help right now. 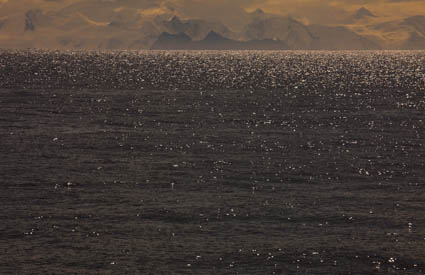 In my boyd of work Antarctica, I’ve limited my photographic practices to the standard practices accepted by most editorial photographers and expected by most media outlets: cropping; despeckling but not retouching; ; noise reduction; sharpening; little or no local color adjustment; no compositing, except for panoramic stitching. I’ve deliberately not released obviously related highly altered images within this body of work, nor do I currently display highly altered images in the same context. Interestingly, there are few clear published guidelines for what is considered acceptable practice today, even though there are many controversies over specific examples released by various media outlets.
In many ways, contemporary culture is experiencing a media crisis. Standard media channels no longer enjoy the credibility they once did. There are fewer and fewer of them and they are operated under continually shrinking budgets, while trying to respond to demands for increasingly diverse content and increasingly rapid response. Now more than ever we need a rigorous and sustained dialog on media practices, from creation through delivery, from professionals and amateurs alike. And we need new media products. Many of us today have become outsider journalists or non-professionals who impact the media sphere. New technology has enabled us to share our images with a wider public through unvetted channels. This is changing media, culture, and history. Blogs broke the news of an American president’s infidelities. The Associated Press released software applications that allow anyone to upload images from a cell phone for possible use in news media outlets. The use of the social network Twitter shifted political events in Iran. In many respects, I’ve become an outsider journalist. I’ve shared my work in Antarctica in many ways; fine art exhibitions; limited edition posters; publications featuring fine art; print on demand books; lectures at universities, trade organization meetings, and trade shows; blogs, including live posting from Antarctica; social networks; accompaniment to technical literature; and advertising for new technology to name a few.  I hope to raise awareness and stimulate constructive dialog about media issues at the same time I raise awareness of the subjects of my work.
To one degree or another we are all involved. We all have a role to play in evolving media; at a minimum we consume, discuss, and value it; at a maximum we produce it. I encourage you to increase your awareness of and involvement in these issues. We enjoy extraordinary possibilities, freedoms, and responsibilities.
Read more here.
Get priority status in my Antarctica 2011 workshop.
Email info@johnpaulcaponigro.com.

Disclosure – Images Based on Elements from Antarctica 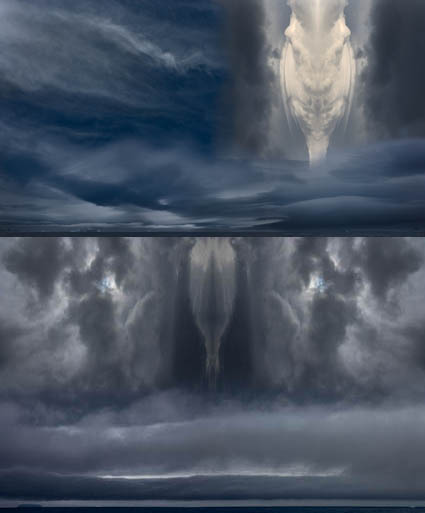 These images use elements drawn from Antarctica but are intended to be seen as universal rather than location specific.
I’ve produced many highly altered images from material shot in Antarctica, but I don’t present them with images from my body of work entitled Antarctica. I also don’t title them Antarctica. Antarctica is the first body of work I’ve produced that uses classic place and date titles. That type of title doesn’t adequately describe a majority of images I make. So, most of my images are titled with a series name, usually describing a process not a thing, and an order of creation number.
Get priority status in my Antarctica 2011 workshop.
Email info@johnpaulcaponigro.com. 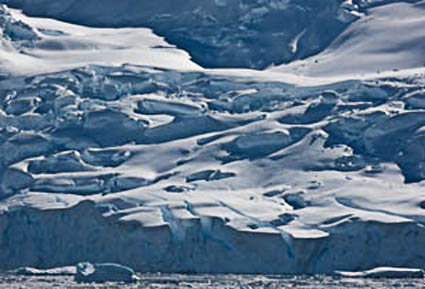 “There is a profound sense of privilege that comes from being in the presence of such rare beauty. It touches you deeply. Witness to the extraordinary, you leave changed – for the better. It’s a blessing born of grace and giving birth to more grace. It’s as if you’ve been given a gift and you feel compelled to keep giving it.”
Read about the highlights from three voyages to Antarctica.
Each voyage was very different from the other, even though we returned to some of the same locations.
Get priority status in my Antarctica 2011 workshop.
Email info@johnpaulcaponigro.com.

Disclosure – Images That Did Make It But Might Not Later 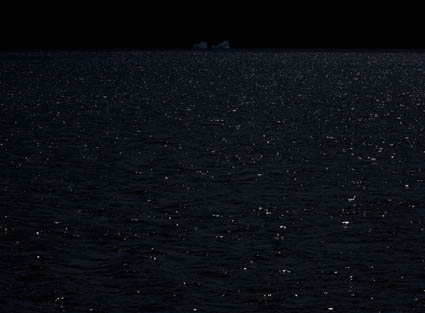 I’m uneasy about this one. I underexposed the image by several stops. A bright sunlit scene became nocturnal in appearance. When discussing this image, many journalists have said the practice of underexposure is accepted. In this case, it distorts the sensation of time. It doesn’t represent the way I saw it, but instead the way I want to see it. I feel like I should censor myself and not include the image. But I included it to stimulate more discussion. Including it required disclosures like this. And more discussion. Do you think this kind of practice is acceptable in editorial contexts?
Find out about my exhibit here.
Stay tuned daily for more resources.
Get priority status in my Antarctica 2011 workshop.
Email info@johnpaulcaponigro.com.

Disclosure – Images That Did Make It 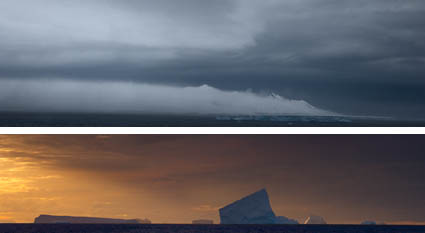 While I’ve limited my practices in my work from Antarctica to those adopted by editorial photographers, I’m interested in pushing the envelope to stimulate useful dialog on contemporary practices. Here’s one. These panoramas were stitched together from multiple shots. I think that practice is fine in the context of journalism, as long as it represents what was before the lens. Yet the second panorama here is different. The exposures for this particular panorama were made over the course of several minutes. There was a lot of parallax so the icebergs had different relative positions in the exposures that were merged. Because of this, you can actually see more icebergs that otherwise would have been hidden. This type of composite actually presents the viewer with more information than a single exposure could. Is this appropriate practice? I think it is, if the author and media outlet disclose their practices. I think the news media ought to disclose much more information than they do: who the author is; how the documents were produced; how they were edited and delivered; who delivered them; what context they were placed in and how that shifts our perception of them; what time and financial constraints influenced the production; who the media derives income from; who the media outlet is owned by. We know the media’s not perfect or unbiased. We need to know who the media is. Way too many assumptions are made. We’ve lost our faith. Reclaim our trust. Give us more disclosure. That’s what I’m doing here.
Find out about my exhibit here.
Stay tuned daily for more resources.
Get priority status in my Antarctica 2011 workshop.
Email info@johnpaulcaponigro.com. 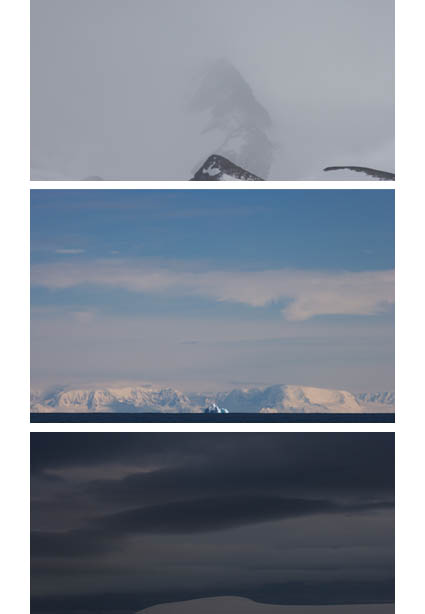 Several images changed for inclusion in my book Antarctica. Why? The original versions contained small, but significant,  elements that were composited from other sources. So I removed them for this project. Even though it’s often highly interpretive, editorial work is about representing the scene as it was witnessed. It wasn’t clear to me until after the initial voyage what kind of project I was developing. As it became clearer and clearer I realized I needed to put certain restrictions on my standard practices – otherwise it would become a different kind of project. There’s nothing wrong with those practices. They’re just not appropriate for this kind of project.
It’s usually only astronomers who realize that the moon in the first version is impossibly lit; it should have light on the same side as the iceberg and mountains. I like to leave clues like this for the viewer that alerts them to the fact that images have been altered. With my other type of work, I usually don’t tell them. Instead, I let them figure it out. This keeps viewers asking a lot of questions, which is really beneficial for everyone. In the case of my Antarctica work, I’m now doing the reverse. It’s appropriate and relevant to do so. In this case, full disclosure raises more questions. Questions and dialog are useful.
Find out about my exhibit here.
Stay tuned daily for more resources.
Get priority status in my Antarctica 2011 workshop.
Email info@johnpaulcaponigro.com.

Disclosure – Images That Didn't Make It 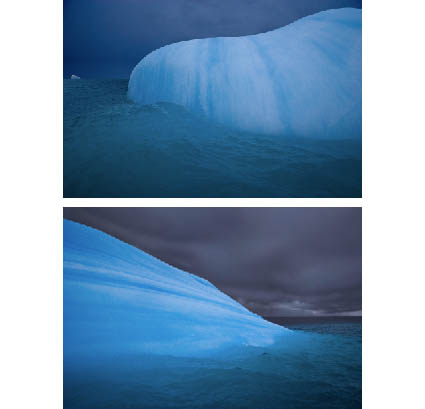 Several images didn’t make it into the second edition of my book Antarctica. Why? This body of work is editorial in nature. I’ve only included images created with the similar limitations. These two images are composites that replace the original background with a Russian research vessel with a more aesthetically pleasing seascape. Even if the author expresses an opinion in it, editorial work is primarily about informing and secondarily about aestheticizing, not the other way around. So these are completely different kinds of images. They need to be placed other contexts.
Find out about my exhibit here.
Stay tuned daily for more resources.
Get priority status in my Antarctica 2011 workshop.
Email info@johnpaulcaponigro.com.