Free PDF – All About Limited Editions 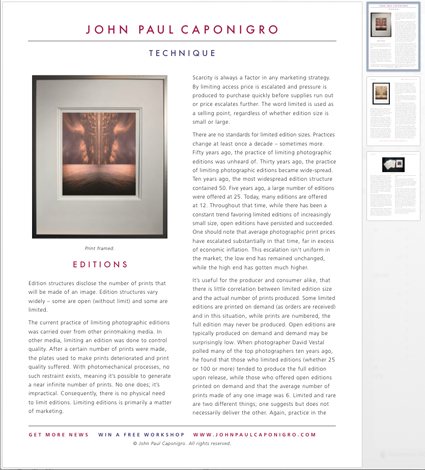 Edition structures disclose the number of prints that will be made of an image. Edition structures vary widely – some are open (without limit) and some are limited.
There are no standards for limited edition sizes. Practices change at least once a decade – sometimes more. Fifty years ago, the practice of limiting photographic editions was unheard of. Thirty years ago, the practice of limiting photographic editions became wide-spread. Twenty years ago, the most widespread edition structure contained 50. Ten years ago, a large number of editions were offered at 25. Today, many editions are restricted to 12 or fewer. Tomorrow’s edition structures will likely change again. Throughout that time, while there has been a constant trend favoring limited editions of increasingly small size, open editions have persisted and succeeded.
One should note that average photographic print prices have escalated substantially in that time, far in excess of economic inflation. This escalation isn’t uniform in the market; the low end has remained relatively unchanged, while the high end has exploded.
Should you limit your editions?
Should you buy only limited edition photographs?
Before you decide, find out more in this free PDF.
Subscribe to Insights enews and download it free.
Learn more in my digital photography and digital printing workshops. 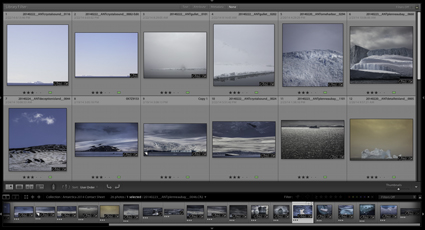 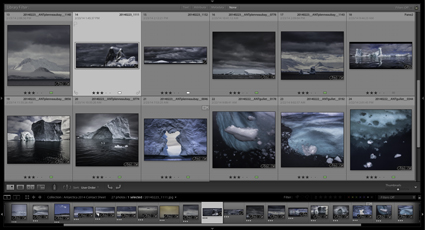 It took me some time to get a clearer sense for the images I made during my sixth voyage to Antarctica with Seth Resnick during our Digital Photo Destinations workshop. Lacking the big moments that immediately stood out on previous voyages (Curiously only a few of these selects were taken during our most dramatic moment when we spent four continuous hours in Pleneau Bay or The Iceberg Graveyard, where we found not one but three ice arches.), this voyage was a quiet sustained build of repeatedly chasing several ideas (minimal spaces, sheltering skies, glacial abstractions, ice details). The quieter more sensitive nature of this work became clearer as I reflected upon the way the files were processed, with a softer touch. Even as I left Antarctica, I wasn’t sure of exactly what I had, but the more time I spend with the work the more I begin to understand it. Antarctica’s many moods and its elusive mysteries are what keep me longing to return.
View more Contact Sheets here.
View Seth Resnick’s images from the same voyage here.
Learn more about my digital printing and digital photography workshops.

Here’s a collection of my favorite quotes by Sally Mann.
“One of the things my career as an artist might say to young artists is: The things that are close to you are the things you can photograph the best. And unless you photograph what you love, you are not going to make good art.” – Sally Mann
“it’s always been my philosophy to try to make art out of the everyday and ordinary…it never occurred to me to leave home to make art.” – Sally Mann
“Unless you photograph what you love, you are not going to make good art.” – Sally Mann
“ If I could be said to have any kind of aesthetic, it’s sort of a magpie aesthetic—I just go and pick up whatever is around. If you think about it, the children were there, so I took pictures of my children. It’s not that I’m interested in children that much or photographing them—it’s just that they were there…” – Sally Mann
“Every image is in some way a “portrait,” not in the way that it would reproduce the traits of a person, but in that it pulls and draws (this is the semantic and etymological sense of the word), in that it extracts something, an intimacy, a force.” – Sally Mann
“I struggle with enormous discrepancies: between the reality of motherhood and the image of it, between my love for my home and the need to travel, between the varied and seductive paths of the heart. The lessons of impermanance, the occasional despair and the muse, so tenuously moored, all visit their needs upon me and I dig deeply for the spiritual utilities that restore me: my love for the place, for the one man left, for my children and friends and the great green pulse of spring.” – Sally Mann
“When the good pictures come, we hope they tell truths, but truths “told slant,” just as Emily Dickinson commanded. ” – Sally Mann
“What is truth in photography? It can be told in a hundred different ways. Every thirtieth of a second when the shutter snaps, its capturing a different piece of information.” – Sally Mann
“I think truth is a layered phenomenon. There are many truths that accumulate and build up. I am trying to peel back and explore these rich layers of truth. All truths are difficult to reach.” – Sally Mann
“If it doesn’t have ambiguity, don’t bother to take it. I love that, that aspect of photography—the mendacity of photography—it’s got to have some kind of peculiarity in it or it’s not interesting to me.” – Sally Mann
“Some of my pictures are poem-like in the sense that they are very condensed, haiku-lik. There are others that, if they were poetry, would be more like Ezra Pound. There is a lot of information in most of my pictures, but not the kind of information you see in documentary photography. There is emotional information in my photographs.” – Sally Mann
“I wish I could be a better writer, but writing is so difficult. I get seduced by visual aesthetics. Because I just like making beautiful pictures, sometimes I wander away from making a clear statement.” – Sally Mann
“There is a great quote from a female writer. She said, ‘If you don’t break out in a sweat of fear when you write, you are not writing well enough.” I tend to agree. I think my best pictures come when I push myself.” – Sally Mann
“I like to make people a little uncomfortable. It encourages them to examine who they are and why they think the way they do.” – Sally Mann
“Sometimes I think the only memories I have are those that I’ve created around photographs of me as a child. Maybe I’m creating my own life. I distrust any memories I do have. They may be fictions, too.” – Sally Mann
“Like all photographers, I depend on serendipity… I pray for what might be referred to as the angel of chance.” – Sally Mann
“I’m so worried that I’m going to perfect [my] technique someday. I have to say its unfortunate how many of my pictures do depend upon some technical error.” – Sally Mann
“All the good pictures that came so easily now make the next set of pictures virtually impossible in your mind.” – Sally Mann
“There’s always a time in any series of work where you get to a certain point and your work is going steadily and each picture is better than the next, and then you sort of level off and that’s when you realize that it’s not that each picture is better then the next, it’s that each picture up’s the ante. And that every time you take one good picture, the next one has got to be better.” – Sally Mann
“ Sometimes, when I get a good picture, it feels like I have taken another nervous step into increasingly rarified air. Each good-news picture, no matter how hard-earned, allows me only a crumbling foothold on this steepening climb—an ascent whose milestones are fear and doubt.” – Sally Mann
“As an artist your trajectory just has to keep going up. the thing that subverts your next body of work is the work you’ve taken before.” – Sally Mann
“Photographs open doors into the past but they also allow a look into the future.” – Sally Mann
Read more Photographer’s Quotes here.
View Photographer’s Documentaries here. 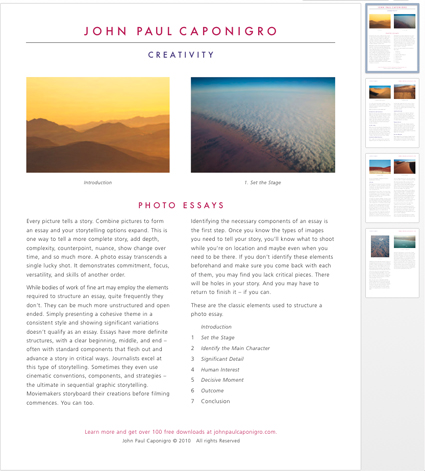 Every picture tells a story. Combine pictures to form an essay and your storytelling options expand. This is one way to tell a more complete story, add depth, complexity, counterpoint, nuance, show change over time, and so much more. A photo essay transcends a single lucky shot. It demonstrates committment, focus, versatility, and skills of another order. Photo essays have more definite structures, with a clear beginning, middle, and end – often with standard components that flesh out and advance a story in critical ways.
Identifying the necessary components of an essay is the first step. Once you know the types of images you need to tell your story, you’ll know what to shoot while you’re on location and maybe even when you need to be there. If you don’t identify these elements beforehand and make sure you come back with each of them, you may find you lack critical pieces. There will be holes in your story. And you may have to return to finish it – if you can.
Here’s are the classic shots used to structure a photo essay.
1            Introduction
2            Set the Stage
3            Identify the Main Character
4            Significant Detail
5            Human Interest
6            Decisive Moment
7            Outcome
8            Conclusion
You could say all other images included in an essay are just variations of these few types of images. I’d be surprised if exceptions couldn’t be found, but they would be exceptions.
Learn more about each shot in this free PDF.
Subscribe to Insights enews and download it free. 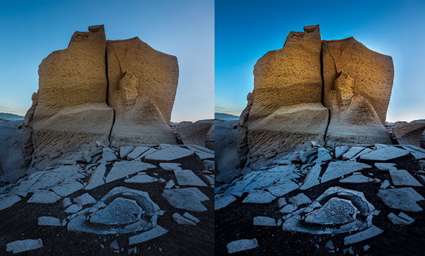 Photoshop CC introduced a long-awaited feature that will change how you adjust your images, when you adjust your images and what you adjust your images with—the ability to use Camera Raw as a filter.
Since it was introduced, Adobe Camera Raw (ACR) has been the industry-standard tool for processing RAW files—the beginning of a digital photographer’s workflow before moving into Photoshop. Sometime later, ACR extended its functionality to other file types like JPEGs. Today, you can use its full power at any point in your workflow while working in Photoshop. This opens up many new possibilities.
Using the Adobe Camera Raw Filter is useful for noise reduction, detail enhancement, color adjustment, localized lens correction, creative distortion and even tone-mapping 32-bit HDR images. Go beyond the maximum setting of Clarity, with two ACR Filters. Set different white balances for different regions of an image. Apply Lens Correction distortions locally. Global, local, double and crossprocessing—the ACR Filter can do it all.
While the ACR Filter revises workflow, it doesn’t rewrite it completely. It’s still better to do the lion’s share of image adjustment during RAW conversion with ACR or Lightroom (both offer the same RAW conversion engine)—preferably as a Smart Object so you can easily change the settings or update the process version. For instance, you’ll get better shadow and highlight detail using ACR during conversion than you will using the ACR Filter after conversion.
So when would you use the Adobe Camera Raw Filter? When the ACR toolset does something Photoshop’s toolset doesn’t. Or, when the ACR Filter does a task more quickly and easily, without sacrificing quality or flexibility. To decide this, compare the two toolsets …
Read more at Digital Photo Pro.
Learn more in my digital photography and digital printing workshops.