New Free eBook – 12 Things We Learned From Each Other 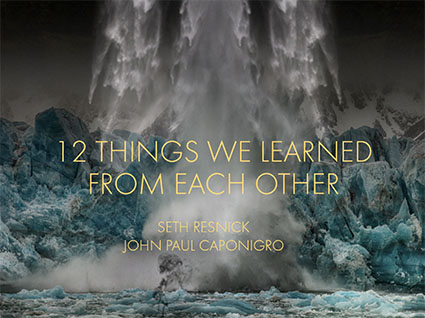 My new free ebook 12 Things We Learned From Each Other details lessons Seth Resnick and I learned from each other by working side-by-side.
What did we learn?
Find out here! 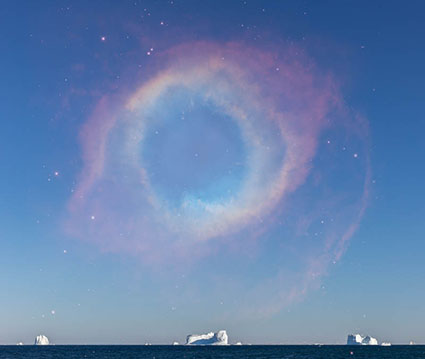 Copying isn’t bad; it depends on how and why you do it. I recommend you try copying – and be clear about why you’re doing it. Though I rarely share these kinds of studies with anyone, I make them frequently – and I learn a lot.

I’m not fond of phrases like, “Good artists copy, great artists steal.” (That phrase itself has a history that borders on theft. Read it here.) They can be interpreted as a legitimization of plagiarism, as long as your sources are unknown or you hide them well. A lot is lost when this happens; the original author goes unfairly unappreciated; the plagiarist tragically passes up the opportunity to find something of their own; readers are deceived; we all lose. The biggest trouble with phrases like this is that so many fail to go further after pronouncing them.

The best thing about phrases like this is that they memorably raise an important set of questions about the wide variety of purposes for copying: forgeries rob money (except the ones museums and collectors commission as insurance policies for exhibition); plagiarism robs intellectual property and content; studies educate the development of artists; appropriation references culturally important touchstones (best done with attribution like a quote); working in the manner of someone can be both a sign of respect (homage) and a way of fanning those flames of inspiration; and making new authentic work after being inspired by another strikes new sparks carrying the torch further.

Follow phrases like these with a rich conversation about the possibilities and you will be richly rewarded every time.

Here are a few resources that will help enliven your future discussions.

Copying Is How We Learn

From Craft to Art – Leaving Dafen

Things get really gray with appropriation.

When Does An Artist’s Appropriation Become Copyright Infringement?

Appropriation In The Digital Age – Richard Prince Instagram & The $100,000 Selfies

Forgery has a fascinating history.

A Brief History of Art Forgery From Michelangelo To Knoedler & Co

How Museums Handle Forgeries In Their Collections 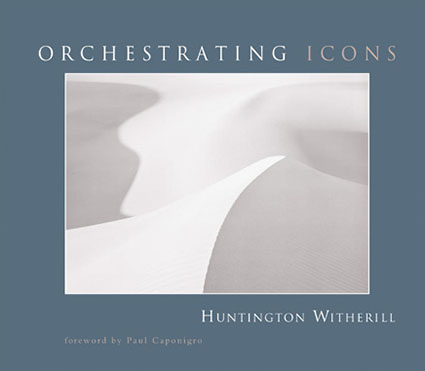 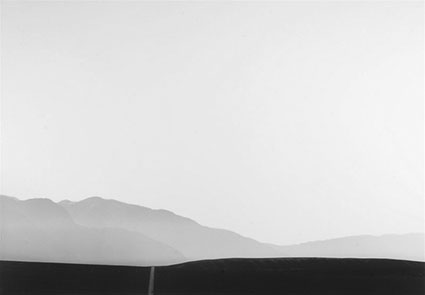 Al Weber’s “Road to Badwater, 1971” demonstrates the effectiveness and power of design simplicity in depicting the immense spaces that characterize Death Valley. The overall sense of atmosphere and distance are communicated through but a few bold blocks of uniform tonal value, each of which help to define the photograph’s unique character. 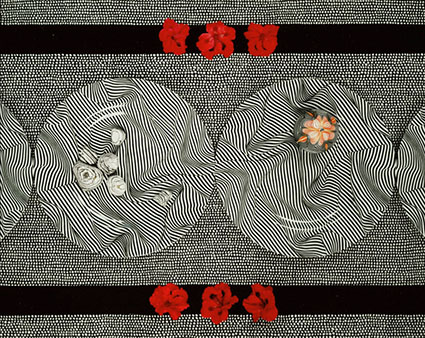 The visual strength of Don Worth’s “Pelargonium Blossoms, 1985” lies within the tension that exists between the intricate textures and patterns, together with a juxtaposition of accent color placed against a largely monochromatic field. Each time I look at this photograph I am drawn into its hypnotic spell. 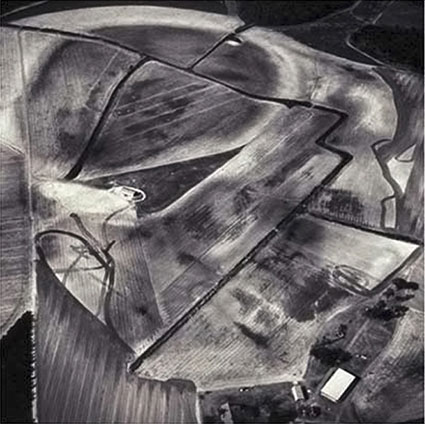 Emmett Gowin’s photographs from his series: “Changing the Earth” exhibit a remarkable juxtaposition of visual beauty in the midst of perceived destruction. It’s not that the subject matter he has chosen to photograph is so often thought of as being of a more or less unseemly nature. It is that he has presented this particular subject – in its perceived negativity – with such an abundance of visual beauty and grace that he seduces the viewer into an irreconcilable dichotomy. 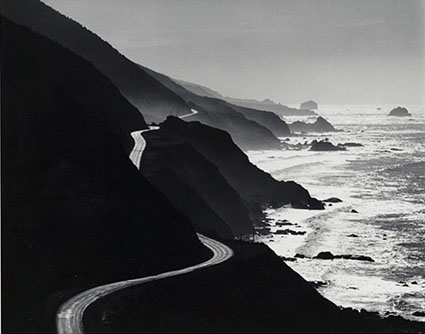 Clearly one of the most iconic images of the Big Sur Coastline, Henry Gilpin’s “US Highway Route 1, 1965” celebrates the wild and austere essence of the Big Sur Coast. The serpentine highway glowing white hot against the dark and foreboding shoreline cliffs projects a scene of exceptional strength and amplitude. 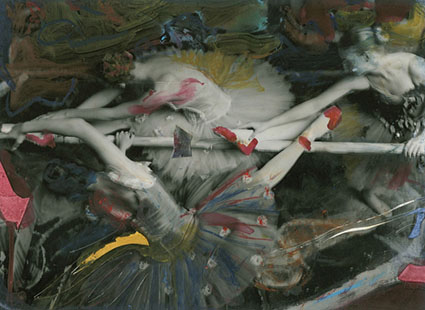 Kim Weston’s hand-painted photograph of ballerinas features a marvelous sense of movement and grace that is punctuated by the introduction of sparse color. The color, itself, seems to further abstract the image, thereby helping to focus the viewer’s attention on the dynamic and symbiotic relationship between the figures, themselves. 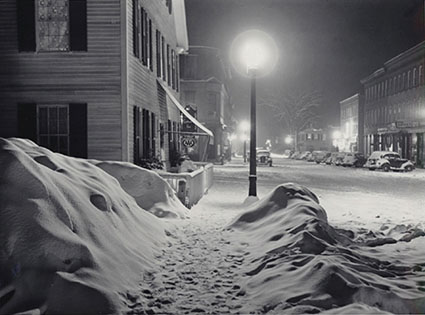 Marion Post Wolcott’s “Blizzard, Woodstock, VT, 1940” portrays a quiet yet bitter cold winter evening. The glimmering street lights serve as an effective and warm counterpoint to what, otherwise, seems a penetratingly cold environment. This photograph makes me want to put on another coat! 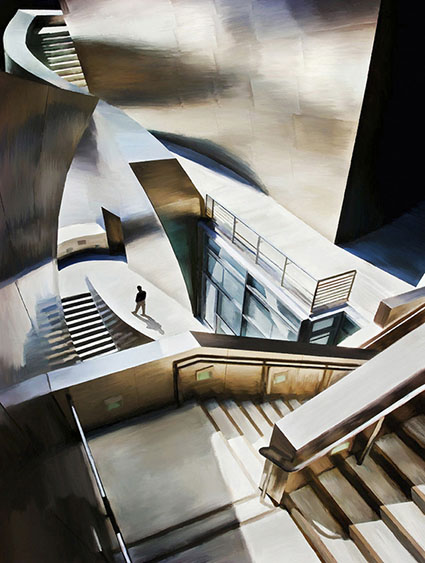 Suggestive of an M.C. Escher drawing, Mark Wainer’s “Stairway #60, Los Angeles” evokes a whimsical maze of mystery and apprehension. Is the figure hoplessly trapped? Or, has he managed to find the hidden escape? 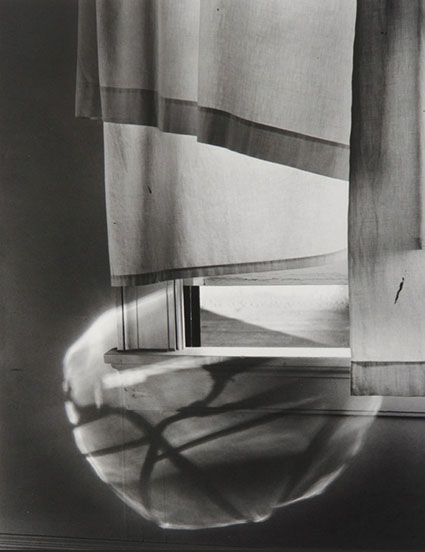 Windowsill Daydreaming, by Minor White, is one of those quintessential photographs in which the light, itself, is the predominate subject. The seductive nature of the subject, in this case, is both highly mysterious, and positively alluring. 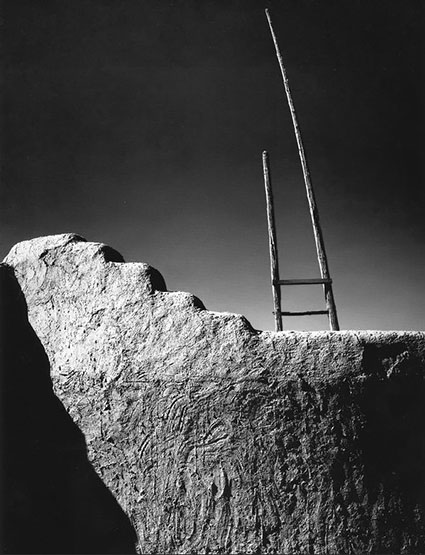 Morley Baer’s “Kiva Ladder, 1973” appears as a graphically rich visual Icon symbolizing the American Southwest and its native cultures. The immense power of graphic simplicity, achieved through the exquisite and economical use of simple line and texture, help to contribute to the photograph’s near universal appeal. 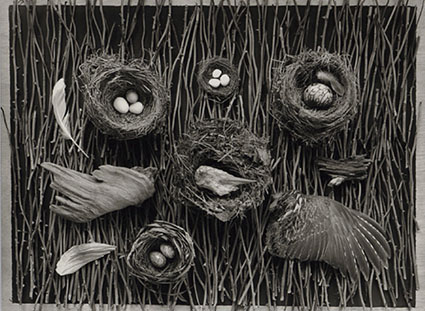 The temptation to reach out and touch the surface of Paul Caponigro’s “Nascent Flight” is quite strong. The overall combination of line, texture, and impeccable detail that comprise this complex yet visually concise still life projects a near miraculous display of inherent strength in the presence of underlying fragility. 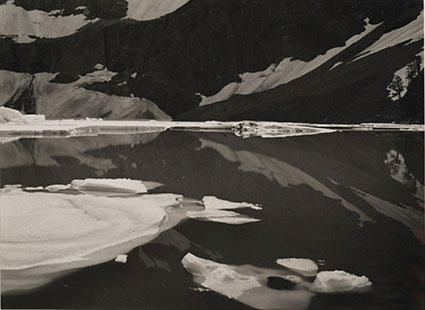 Philip Hyde’s “Iceberg Lake” demonstrates a marvelous sense of asymmetrical balance. While the ice forms seem randomly placed within the composition, the organization of forms within the overall frame are not only solidly connected, but also perfectly well balanced. 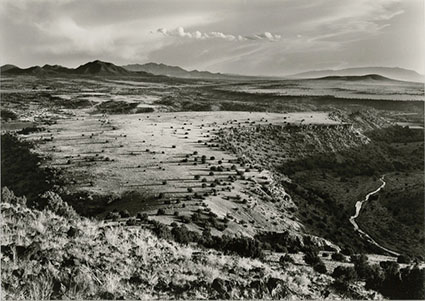 William Clift’s “La Mesita, New Mexico, 1978” portrays the open desert with uncommon elegance and aplomb. There is undeniable magic in the light that Clift has captured, here. And taken together with an exquisite sense of detail and overall delicacy, I am compelled to step into the frame and go exploring! 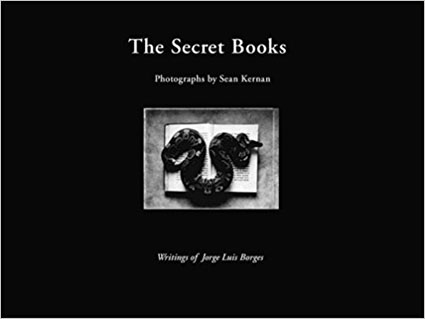 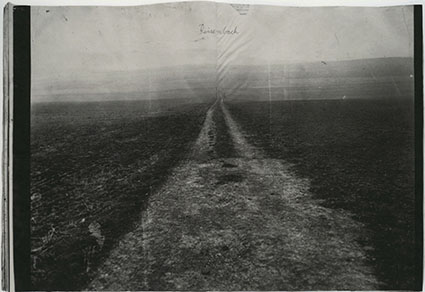 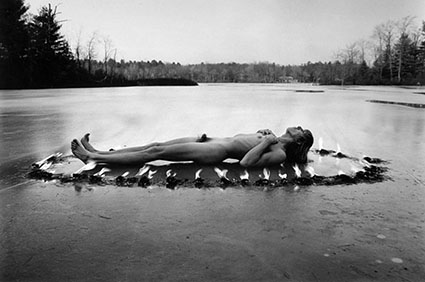 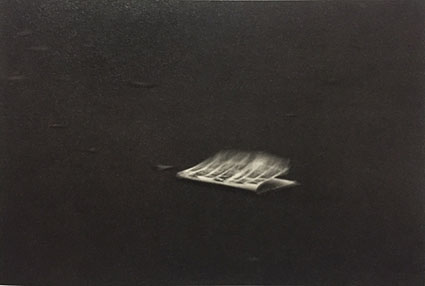 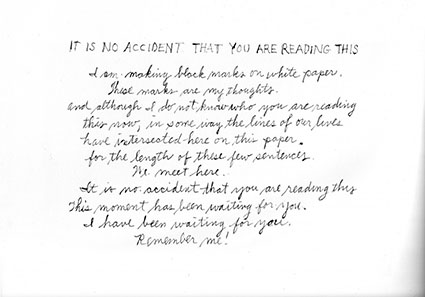 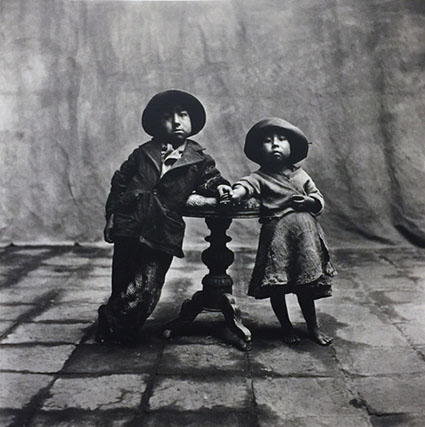 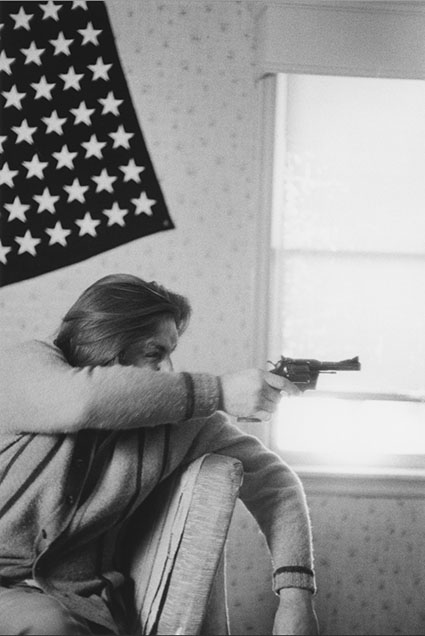 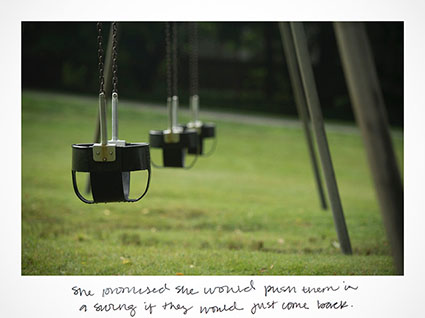 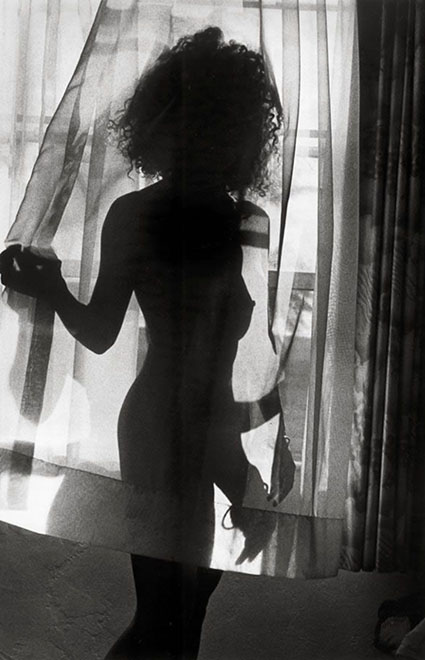 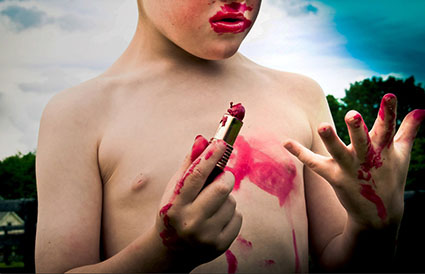 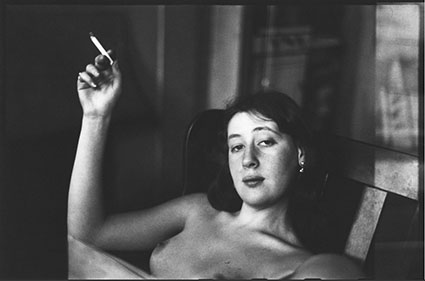 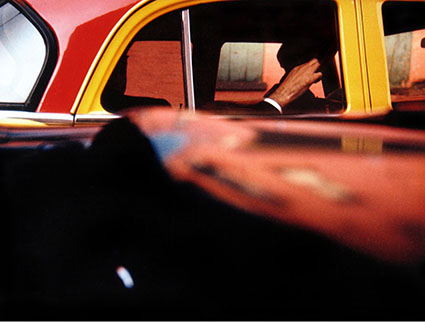 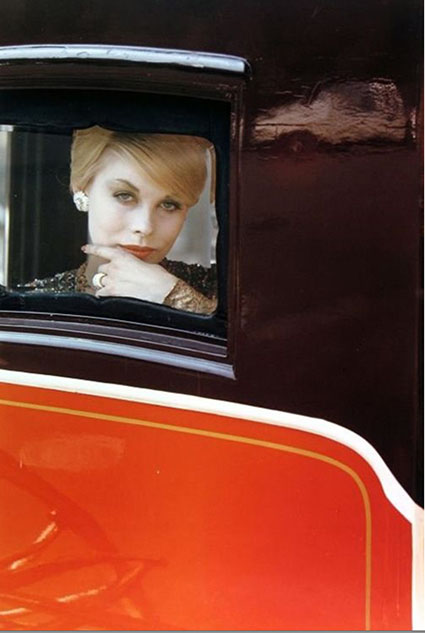 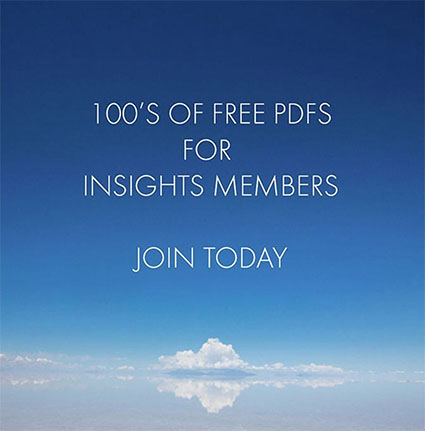 Sign up today for my Thursday newsletter.
This issue features HDR techniques and celebrates women in photography.

Finding The Magnificent In The Mundane – Chris Orwig

“Chris Orwig brings unique perspective, creativity and passion to all that he does. As a photographer, he subscribes to Marc Riboud’s observation that “Photography is about savoring life at 1/100th of a second.” For Chris the adventure is now, and the journey has already begun — discover, look, listen, learn and live.”
Chris shares that what’s imperfect or broken can be a source of depth, strength, and inspiration.
Find out more about Chris Orwig here.
Find his books Visual Poetry and People Pictures here.

The Poetics of Pictures – Chris Orwig

SCAMPER
Having trouble coming up with new ideas? Get thousands of ideas with one word. Try SCAMPER. In 1939 advertising executive Alex Osborn, “the father of brainstorming”, first proposed a set of nine strategies for creative thinking, seven of which were later rearranged by Bob Eberle into the mnemonic SCAMPER.
S   Substitute
C   Combine
A   Adapt
M   Modify
P   Put to Other Uses
E   Eliminate
R   Rearrange
What are the other two missing words?
Minify, which I like to think of as expand and contract or put another way reduce and enlarge.
Reverse, which I think is the most powerful tool of all. It’s typified by the 180 degree rule. Do the opposite.
The underlying assumption with SCAMPER is that new ideas are based on old ones. This may not always be the case, but often it is. To use SCAMPER, you have to start with something.
You can use SCAMPER as a list of questions that can be used to generate new ideas. Simply ask, “Can I ____ something?” inserting the words SCAMPER represents one at a time. Next, you might try using two words at a time. Later try three. Classically, the best solutions are the simplest, but not always.
Find over 20 creativity tips here.
Learn more in my workshops.